Home » Doctrine » Why We Call The Virgin Mary “Theotokos”

Why We Call The Virgin Mary “Theotokos” 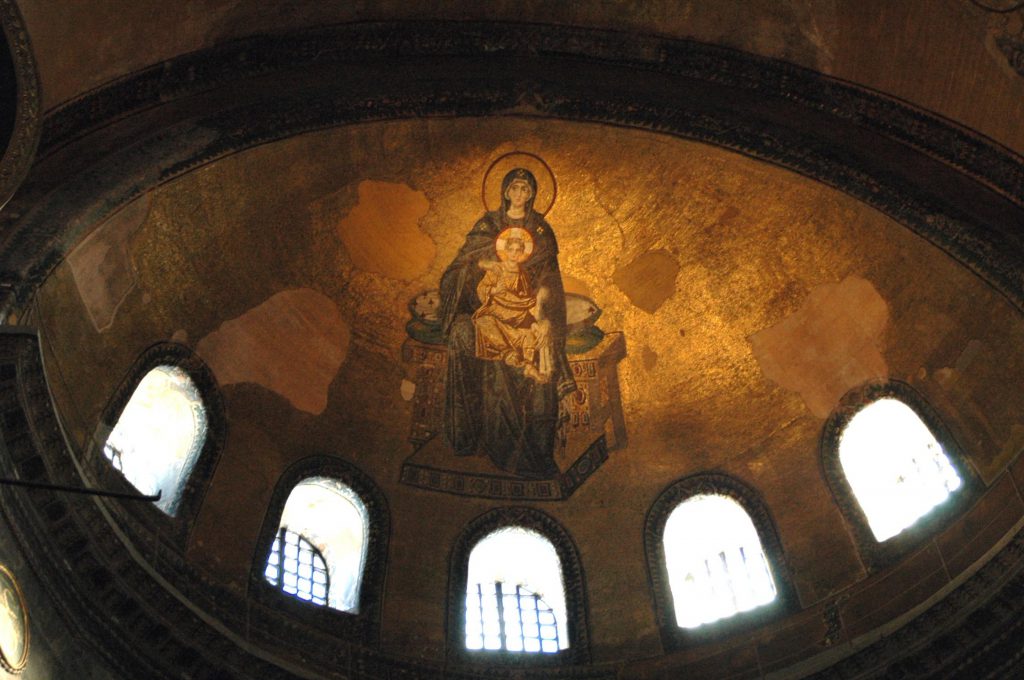 In the Eastern Orthodox Church, we refer to the Virgin Mary as “Theotokos”, the mother of Jesus Christ, the Son and Word of God. Many people who call themselves Christian reject this title; however, it is this title that protects the identity of her Son, who is the unique Theanthropos, the God-man. In this post, we explain why we call the Virgin Mary Theotokos and where this title came from.

Mary conceived by the power of the Holy Spirit, and her virginity remained intact after Christ’s birth, a divine sign of who He was. Moreover, the Virgin Mary did not have relations with Joseph after the birth of Jesus. In Orthodox Tradition, we also call her Panagia, the “All-Holy,” indicating her closeness to God in her obedience.

What does Theotokos mean?

The title Theotokos (Θεοτόκος) is a Greek word that means Birth-giver to God, Mother of God, or God-bearer. The most common of these translations is Mother of God, though the other two are also fairly common.

The most literally correct translation is Birth-giver to God, though God-bearer comes close. Theophoros (Θεοφορος) is the Greek term more correctly translated as God-bearer (a title given to St. Ignatius of Antioch, for example). The most popular translation, Mother of God, is accurate to a point. However, Mother of God is the literal translation of another phrase found on nearly all icons of the Theotokos: Μητηρ Θεου (Meter Theou, ΜΡ ΘΥ). Many English-speaking Orthodox churches in North America adopt the original term itself into English, transliterating it simply as Theotokos.

These ancient Christian titles for Mary do not mean that she somehow created God. Even mothers giving birth to exclusively human children do not create their children. Rather, these titles for her are an affirmation that the Christ contained in her womb is indeed God, the Theanthropos. She is not His origin nor the source of the Godhead, but she did quite literally give birth to God. If we affirm that Jesus Christ is God, then we must call her Theotokos, for she gave birth to God Himself.

Where did the title Theotokos come from?

As a title for the Virgin Mary, Theotokos was recognized by the Church at Third Ecumenical Council in AD 431. Theotokos had already been in use for some time in the devotional and liturgical life of the Church; the Council merely affirmed its use in its battle against the heresies of Nestorius, who insisted on calling the Virgin Mary Christotokos (“birth-giver of Christ”) instead.

While this may seem insignificant, the distinction is quite important from a theological standpoint. Nestorius believed that Jesus Christ existed as two Persons, the man Jesus Christ and the divine Logos, which dwelt within him. Thus, according to Nestorius’ view, the Virgin Mary gave birth to the man Christ, not to the divine Logos. However, the Church upheld that Jesus is fully God and fully man and that His two natures (human and divine) were united in one Person: the divine Logos, the Son of God.

Because Mary is the mother of God the Son, she is therefore duly entitled Theotokos. Calling the Virgin Mary Theotokos or Mother of God (Μητηρ Θεου) does not mean that Mary is coeternal with God, or that she existed before Jesus Christ or God existed.

During the divine services in the Orthodox Church, we often use Mary’s full title. Our All-holy, immaculate, most blessed and glorified Lady, the Theotokos and Ever-Virgin Mary. What do all of these descriptors mean?

We call the Theotokos Panagia (all-holy) not because she is equal to God. Rather, we say this because she is the supreme example of synergy, or cooperation, between God and man (Luke 1:38). Sometimes we also refer to her as the New Eve, because her submission to the will of God offset Eve’s disobedience in Paradise

The Orthodox Church calls Mary “immaculate,” “pure,” or “spotless” (achrantos in Greek). Orthodoxy rejects the Roman Catholic doctrine of the Immaculate Conception; we do not believe the Virgin Mary was conceived free from the stain of original sin. Instead, we believe she lived a sinless life of her own free will. She was born a sinner, a human with full human nature, like the rest of us. Her Son and God, Jesus Christ, took flesh from her. So as Son of God, He assumed fallen human nature from her and redeemed humanity by His Crucifixion and Resurrection.

Most blessed and glorified Lady

The Orthodox Church honors the Mother of God on account of the Son. St. Cyril of Alexandria, along with the Fathers of the Council of Ephesus, insisted on calling Mary “Theotokos” not just to glorify her, but to safeguard a right doctrine of Christ’s person, the Incarnation. Orthodox Christians feel that one cannot really believe in the Incarnation and not honor Mary.

We honor Mary as “ever Virgin.” In other words, she was a virgin before, during, and eternally after the birth of our Lord Jesus Christ. This does not, as some believe, elevate her to some special status or incite us to worship her. Rather, it is an affirmation of who Jesus Christ is, as are all titles given to the Theotokos. Because He has chosen her to be his mother, to conceive Him, to give flesh to Him, to give birth to Him, we understand her as a finite dwelling place of the infinite God. Thus, because she is in this sense this new Holy of Holies, her ever-virginity is a natural characteristic of such an awesome reality.

In iconography, her virginity before, during, and after the birth of Christ is represented by three stars on her shoulders and forehead.

In the Eastern Orthodox Church, we call the Virgin Mary Theotokos to protect the identity of her Son: our Lord and God and Savior Jesus Christ. While many people object to this on false grounds, Eastern Orthodoxy continues to uphold Holy Tradition. We continue to honor her as is meet, both as the mother of our Lord and as the supreme example of living the Christian life.