Home » Doctrine » Ancestral Sin: The Fall And Its Consequences

Ancestral Sin: The Fall And Its Consequences 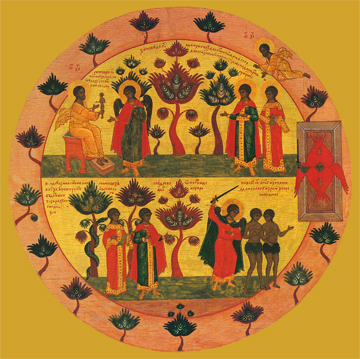 In the Old Testament account of creation, God created mankind and established a place for him called Paradise. He also gave him a commandment regarding the tree of the knowledge of good and evil (Gen. 2:16-17). In disobeying this commandment, Adam and Eve sinned, thus willingly departing from God’s path to perfection and separating themselves from Him Who is the Source of Life. In this, almost all Christian churches agree. However, when it comes to the details regarding the Fall and sin, the Roman West takes a different view than the Orthodox East. In this post, we explore the consequences of the Fall, highlighting the differences between the Western view of original sin and the traditional view held by the ancient Church, ancestral sin.

What are the consequences of the Fall?

The difference between original sin and ancestral sin manifests mainly in the consequences of the Fall. On some points here, the Eastern and Western churches agree, while on others they diverge.

First and foremost, the Fall caused mankind to become subject to mortality (Gen. 3:19). While the West often views this as a sort of punishment, or penalty, the East emphasizes the mercy of God in His judgments on Adam and Eve. St. Gregory the Theologian writes, “Yet here too He provides a benefit – namely death, which cuts off sin, so that evil may not be everlasting. Thus His punishment is changed into a mercy.”

Mankind has an inclination toward sin

Because all mankind fell away from the grace of God through Adam’s disobedience, man now has a propensity – a disposition or inclination – toward sin. Because just as death entered the world through sin, now sin enters the world through fear of death.

In the West, many Christian denominations insist that along with the inclination to sin, we enter this world with the guilt of Adam’s sin on our soul. This view came about through the teachings of Blessed Augustine of Hippo (c. 354-430 AD), whose teachings were (and still are) quite popular in Western Christianity. In the East, however, we maintain the view of the Church Fathers: we are guilty not because of Adam’s sin, but because of our own sin.

Sin mars the image of God in us

Because of our strong propensity to commit sin, the image of God in man (Gen. 1:26-27) is also fallen. In the West, Calvinism specifically tends to take this a bit too far, teaching the doctrine of total depravity. This essentially means that, as a consequence of the Fall, apart from the efficacious (irresistible) or prevenient (enabling) grace of God, every person born into this world is completely unable to choose by themselves to follow God, refrain from evil, or accept the gift of salvation. In other words, God must initiate the relationship and do all the heavy lifting. This view quite obviously necessitates the denial of free will.

Naturally, this contradicts the position of the early Church, which insists on the inherent goodness of human nature; after all, God is not the author of evil. That which He creates cannot be evil in its nature. Even in our fallen state, subject to ancestral sin, we are still capable of doing good. Although, bondage to death and the influence of the devil often dulls our perception of what is good and leads us into sin.

This creates a synergistic relationship between mankind and God, one in which we are fellow-workers with Him on the path to our salvation (1 Corinthians 3:9). If we are to achieve full fellowship with God, we cannot do so without His help. Yet we must also play our own part, making our contribution to this common work with God. Through synergism, we maintain our free will and ability to choose whether to walk with God or turn from Him.

Desire often goes out of control

Even after the Fall, the intellectual, desiring, and incensive (forceful/driving) aspects of the soul are natural and therefore neutral. They can be used in a good way, or in a bad, harmful way. For instance, desire is very good when one directs it toward God. But when desire is out of control, one may use it in very inappropriate ways, like becoming gluttonous or lusting after another person’s spouse.

The classic analogy is that these powers of the soul are like iron, which can be made into a plow to help grow food, or into a sword used to kill someone.

Other consequences of the Fall

Aside from all the other consequences we mentioned above, the Fall also brought with it things like sweat, toil, hunger, thirst, weariness, sorrow, pain, suffering, sickness, tribulations, tragedy, and tears. God allows them as the natural consequence of sin, and often they can be useful on our path to salvation and holiness.

How does the Church define Ancestral Sin?

Instead of original sin, which is used in Western Christianity, the Orthodox Church uses the term ancestral sin to describe the effect of Adam’s sin on mankind. We do this to make one key distinction; we didn’t sin in Adam (as the Latin mistranslation of Romans 5:12 implies). Rather we sin because Adam’s sin made us capable of doing so.

The Greek word for sin, amartema, refers to an individual act, indicating that Adam and Eve alone assume full responsibility for the sin in the Garden of Eden. The Orthodox Church never speaks of Adam and Eve passing guilt on to their descendants, as did Augustine. Instead, each person bears the guilt of his or her own sins.

How this impacts our understanding of salvation

Because Catholicism understands sin in legal terms, the West views sin and death as a debt and crime against God. Even if God forgives your sins, you must still pay for them with temporal punishment in Purgatory (note that most Protestants reject this). God essentially requires satisfaction both for the guilt of the sin and for the debt the believer owes God in payment. Therefore, salvation in Catholicism and Protestantism means satisfying God and avoiding punishment.

In contrast, Orthodox theology views sin as “missing the mark,” or failing to live up to the life expected of us by God. Therefore, our goal is not to miss the mark again. Salvation for the Orthodox means achieving theosis (becoming like God in the way we live our lives). The Orthodox Church does not teach temporal punishment, for God’s forgiveness cancels out the need for it. The Orthodox agree that forgiveness doesn’t “remedy all the disorders of sin” (CCC, 1459). However, we do not agree that the solution to this lies in making satisfaction for your sins. Instead, we teach that our behavior must change, and that we must reorient ourselves toward God.

Christ, by His Death and Resurrection, conquered the devil and death, freeing mankind from the fear of death (Heb. 2:14-15). He made possible a more complete communion between God and man than was ever possible before. This communion allows each of us to become “partakers of the divine nature”. It allows us to transcend death and, ultimately, the consequences of the Fall passed to us through ancestral sin.