Holy Sacraments in the Orthodox Church 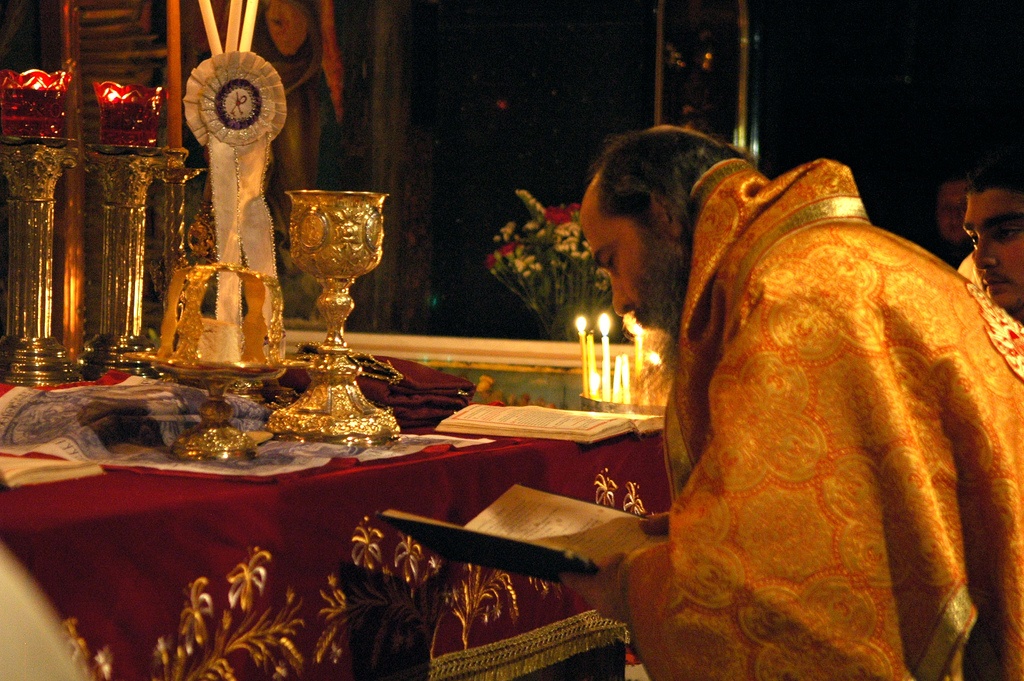 In the Orthodox Church, sacraments are ways in which we participate in the divine grace of God. We consider everything that is in and of the Church to be sacramental, because the Holy Spirit acts through everything that takes place within the Church. And everything the Holy Spirit does bestows grace upon us. However, the Church does name seven particular sacraments: Baptism, Chrismation, Eucharist, Confession, Holy Unction, Marriage, and Holy Orders. In this post, we explore these seven mysteries and explain their importance in the Life of the Church.

What is a Sacrament?

Sacrament comes from the Latin word sacramentum, which means “a consecrated thing or act,” i.e., “something holy”. This is a translation of the Greek mysterion, which means “mystery”. Thus, in the Orthodox Church, a Sacrament is a Holy Mystery. This is simply because at its root lies the mystery of Our Lord and Savior Jesus Christ, His relationship to God the Father and God the Holy Spirit, and His relationship to each of us. These are things we will never understand, because God’s essence and power is far beyond our grasp.

The sacraments, like the Church, are both visible and invisible. In every sacrament there is an outward visible sign along with an inward spiritual grace. They are moments we experience only in the Life of the Orthodox Church, in which God reveals Himself to us and imparts His grace upon us.

The first of the Holy Mysteries is Baptism, which brings us into the Church. Through this Mystery, we become part of the Body of Christ. As the priest submerges us into the waters three times (in the name of the Trinity), we die to the old ways of sin. Our sins are forgiven, and we are born again to a new life in Christ.

Following the custom of the early Church, we encourage the baptism of infants because we believe baptism bears witness to God’s action of choosing a child to become part of His people. From the day of baptism, children, with the help of their family and the Church, will grow and mature in the life of the Spirit. Adults wishing to become Orthodox may experience this if there was no previous baptism in the name of the Trinity.

Chrismation (called Confirmation in Roman Catholic tradition) immediately follows baptism. The Orthodox often see this holy sacrament as our “personal Pentecost,” because it is through this Mystery that we receive the gift of the Holy Spirit through the Church.

In Chrismation, the priest anoints various parts of the body of the newly-baptized with Holy Oil. The oil is a sign of strength and consecration to God. Chrismation emphasizes that each person is a valuable member of the Church, including children. Moreover, it highlights that the Holy Spirit blesses each of us with certain gifts and talents. Our anointing also reminds us that our bodies are valuable and are involved in the process of salvation.

After Baptism and Chrismation, the newly-baptized usually receives holy communion, especially infants. There is never time when the young are not part of God’s people.

Holy Communion, often called the Eucharist (thanksgiving in Greek), is the Sacrament of sacraments in the Orthodox Church. We partake of the Eucharist during every Divine Liturgy. Unlike most other Christians, we believe the bread and wine used in this Sacrament become the literal Body and Blood of Christ, the Eternal Passover Lamb. However, unlike Roman Catholic theologians, we do not use terms like transubstantiation to try to explain how this is so.

This Sacrament is arguably the most important one in the Life of the Church for a few reasons. First, the Eucharist brings us into communion with Christ. Through this communion with Christ, we can progress toward theosis (salvation) and eternal life in the Kingdom of God. Secondly, it provides us with a source of strength for life and gives us forgiveness of our sins. When received with proper preparation, repentance, and fasting, communion draws us together into the fellowship of God’s people, His church, separating us from the forces of evil in this world.

Read More: On Abstaining From The Eucharist

Because partaking of Holy Communion is a confirmation of our unity in the Faith, only baptized Orthodox Christians in good standing can receive the Eucharist in our churches. This offends other Western Christians, but it shouldn’t. Why? Because shared communion is not the means to unity, but the expression of that unity.

When we sin, we distance ourselves from God, our fellow human beings, and our true selves. Penance (or Confession) is the Mystery through which we receive God’s forgiveness of our sins. After we confess our sins, our relationship with God and with others is restored and strengthened. We essentially go back to the fullness of our baptismal state, renewed in Christ. Through this Sacrament, Christ continues to heal those broken in spirit and restore the Father’s love to the lost.

The Church often reserves confession for periods of fasting, especially Great Lent; however, baptized Orthodox Christians can prepare for and go to Confession any time they feel the need. At a minimum, Orthodox Christians should confess at least once a year; some confess more frequently, though, from once a quarter to every time they prepare to receive the Eucharist.

Read More: What Does The Bible Really Say About Confession?

Anointing of the Sick (Holy Unction) is the Orthodox Church’s sacrament of physical and spiritual healing. It reminds us that when we are in pain, Christ is present with us through the ministry of His Body, the Church. He is among us to offer strength to meet the challenges of life, and even the approach of death.

As with Chrismation, clergy use oil in this Sacrament as a sign of God’s presence, strength, and forgiveness. The Church offers unction to all who are sick in body, mind, or spirit, not just those near death. After reading seven epistle lessons, gospel lessons, and prayers devoted to healing, the priest anoints the body with the oil. The Orthodox Church celebrates this Mystery for all its members on Holy Wednesday during Great Lent.

Through the Church’s Sacrament of holy matrimony, God (through the priest) joins a man and a woman as husband and wife. (Note: this differs from Roman Catholic practice, in which the man and woman confer the Sacrament on each other, with the priest serving only as a witness.) In marriage, they enter into a new relationship with God, the Church, and each other. One focused on mutual love and self-sacrifice.

According to Orthodox teachings, marriage is not simply a social institution or legal contract. It is an eternal vocation of the Kingdom of God that continues from this life into the age to come. The Holy Spirit calls husband and wife to share their Christian life together in all respects. Each, with the aid of the other, will grow closer to God. Therefore, not just anyone can marry in an Orthodox church. You must make sure you and your spouse fulfill certain requirements before a priest can officiate your marriage.

Despite the eternal nature of marriage, out of mercy the Church allows widows, widowers, and the divorced to remarry. However, the Church does discourage these second (and in extremely rare cases, third) marriages.

The Holy Spirit preserves the continuity of the Orthodox Church through the Sacrament of Holy Orders. Through ordination, men chosen from within the Church are called to serve as pastor, teacher, and representative of the parish. Each is also a living icon of Christ among His people.

Following the custom of the Apostolic Church, there are four major orders of the Church’s ministry, three of which have their own special ordinations:

The bishop is a successor of the Apostles, who used to serve as the main celebrant of the Divine Liturgy in the early Church. As the Church grew, bishops appointed priests and deacons to minister to parishes in their name. Each of these ministries has its own set of responsibilities. For instance, only a bishop may ordain others to the Deaconate or the Priesthood.

The Church ordains only men to become deacons, priests, or bishops. She permits men to marry before they enter the Holy Orders, but not after. This practice goes back to the earliest period in the history of the Church. We know some of the Apostles (the first “priests” of the Church) were married. Saint Paul also teaches that clergy are to be “husband of one wife”. Moreover, the 5th and 6th Ecumenical Councils state “if anyone wants to contract a legal marriage with a woman before being admitted to the clergy as subdeacon, or a deacon, or a presbyter previous to ordination, let him do so” (6th Canon). The same canon also says, “no…deacon or presbyter at all, [after ordination] has permission to contract a matrimonial relation for himself; if he should dare to do this, let him be deposed from office.”

In the early Church, women were ordained to become deacons just as men. The Church ordained them because it was considered improper for male priests to touch female parishioners to baptize or anoint them. This practice eventually fell into disuse as society began to change and the taboo of men touching women faded away.

Some jurisdictions of the Orthodox Church still have deaconesses today, especially in female monasteries.

Since the sixth century, Bishops have been chosen from the celibate clergy. Note that the Orthodox Church does not have women priests, because the priest is an image of Christ, who was male.

To summarize, the Orthodox Church places immense importance on the Sacraments. They function as pathways that bring the faithful closer to God. If one is Roman Catholic or Protestant, one may notice some similarities and/or differences between the Orthodox sacraments and one’s own.

Read More: The Teachings of the Orthodox Church