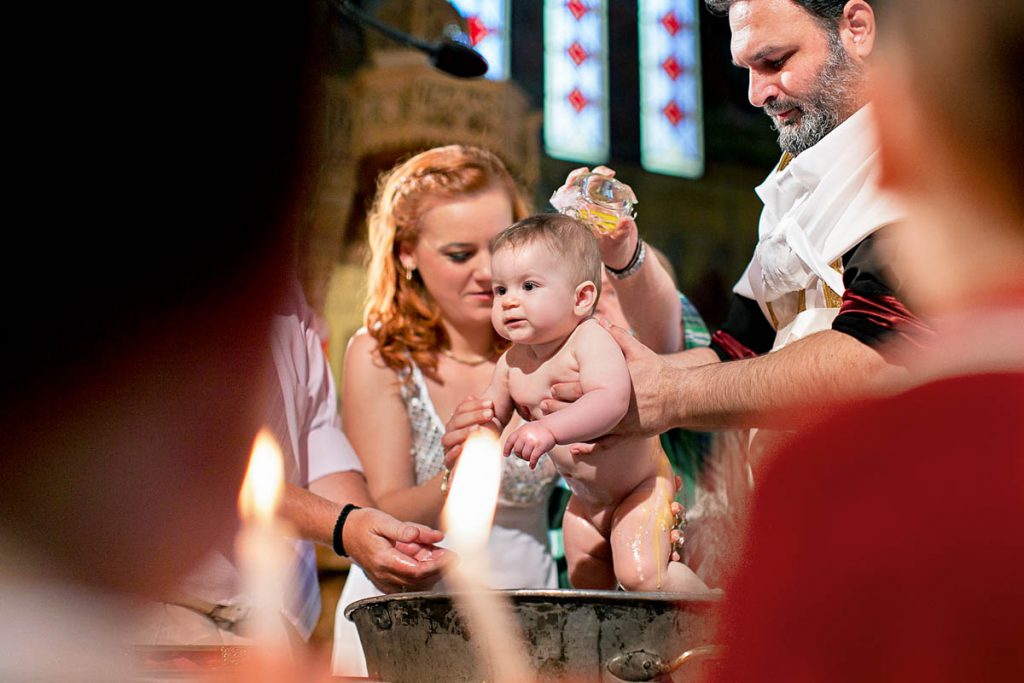 Infant baptism is perhaps one of the more controversial topics within Christendom today. Especially in the United States, which has been profoundly shaped by individualistic Baptist culture. Despite Protestant insistence to the contrary, the baptism of infants is indeed a biblical practice that has been a part of Christian history and Tradition for nearly 2,000 years.

The “prevailing” opinion on infant baptism

Many Protestant denominations now reject the baptism of infants, claiming it is not biblical. Instead, they believe only those who are mentally mature and developed “enough” to make a reasonable and conscious decision can receive baptism (which, conveniently, you won’t find anywhere in Scripture). Theology like this is the natural result of adherence to the innovative doctrine of Sola Scriptura, in which each individual Christian becomes the arbiter of biblical truth. It is also the result of a poor understanding of the nature of God’s covenants and His relationship with His people.

After appearing to Abraham, our forefather in the Faith, Almighty God entered into a covenant with him. He promised to be Abraham’s God and the God of his descendants, who in turn would be His chosen people. The seal of God’s relationship with Abraham was circumcision, the physical sign that one belonged to God.

Saint Paul posits that, in the Church, circumcision has been done away with as the sign of the covenant (Galatians 6:15). While God no longer employs circumcision as before, He continues to be the God of the covenant. He has not changed the way in which He deals with His people, even though the covenant with Abraham has come to fulfillment in the New Covenant (Galatians 3-4). God still uses physical means to establish His covenant relationship with His people, and to communicate His grace. This sign distinguishes His people from the world, marking them as His own; and in the Church today, that new covenantal sign is baptism, the fulfillment of circumcision.

In Colossians, Saint Paul writes, “In Him you were also circumcised with the circumcision made without hands, by putting off the body of the sins of the flesh, by the circumcision of Christ, buried with Him in baptism, in which you also were raised with Him through faith in the working of God, who raised Him from the dead (2:11-12). What circumcision was to Abraham and his descendants until the coming of Christ in the flesh, baptism is for Christians. It is the mark of God’s ownership and of our salvation (Romans 4:11).

Under the Old Covenant, every male child became a complete member of the covenant after circumcision on the eighth day after birth. He could even eat of the Passover sacrifice. Baptism in Christ absorbed and fulfilled this rite, as we know from the first council in Jerusalem (Acts 15:5; Acts 21:21).

God not only established the sign of circumcision, but also told Abraham very clearly who should receive it (Gen 17:12). Nowhere in the Bible does it express that despite absorbing the rite of circumcision, baptism would suddenly exclude children. Jesus did not have a problem with children gaining full inclusion to the covenant: He Himself was circumcised as an infant (Luke 2:21), like John the Forerunner (Luke 1:59).

Indeed, infant circumcision was mandated by God, and thus serves as the biblical precedent for infant baptism. Circumcision was given to infants of one or more believing parents, and the same is true today of baptism. Indeed, as St. Peter said on the day of Pentecost about the forgiveness God promises in baptism, “acts 2:39).

The oikos formula in the New Testament

Repeatedly throughout the New Testament, we come across several examples of whole households being baptized. It is so common that there is a clearly repeated formula. We call this the oikos formula (oikos is the Greek word meaning house, household, or family).

Here are some examples of this lived out in the Scriptures:

These references to receiving the covenant sign of baptism use the same language as the references to Abraham’s reception of the covenant sign of circumcision. The Old Testament pattern of giving God’s salvation and the sign thereof to the entire household, including infants (remember Isaac in Genesis 21:4), carries right over into the New Testament. The salvation of the household is the usual pattern within the New Testament, not the salvation of individuals (John 4:53; Acts 10:2, Hebrews 11:7-9; Matthew 10:12-14).

The baptism of individuals as practiced and emphasized by the Baptist movement was not the practice of the first Christians. Indeed, there is not one Scriptural reference to any person growing up in a Christian home, finally becoming an adult, exercising reason and believing, and then receiving baptism. It simply did not happen. The Apostles and their disciples baptized infants together with the rest of the household, and those infants born into a Christian family received the grace of baptism after the pattern of Abraham.

Children are part of the Kingdom

Thus, Jesus includes children in His Kingdom and in the covenant He establishes in His Name. There is no partial involvement in the Kingdom of Heaven. We are either members or not. To argue that children must wait until some magical age before they become fully communing members of the Church goes directly against Christ when He says, “Let the little children come to Me, and do not forbid them; for such is the kingdom of God” (Luke 18:16).

Keep in mind: Jesus was once an infant Himself. He became incarnate as an infant, and He was never separate from God, even in His mother’s womb. In our Lord all of humanity comes into the perfect union expressed in the Eucharist, which we partake of only through baptism. Christ makes both childhood and adulthood fully capable of expressing and participating in the Kingdom of Heaven.

In addition to the biblical evidence in favor of infant baptism, many writings from the Fathers of the Church also express the reality of this practice in the early Church:

Many of the greatest Fathers of the third and fourth centuries did not receive baptism until adulthood, mostly for political reasons, despite having Christian parents. Many of these Fathers later insisted in their teachings that families baptize their newborn children, notably St. John Chrysostom, St. Ambrose, and St. Cyril of Alexandria.

The Lord Jesus Christ taught saying, “Assuredly, I say to you, unless you are converted and become as little children, you will by no means enter the kingdom of heaven (Matthew 18:3). Far from being unbaptized Christians and second-class citizens in the Church, Orthodox children are both fully baptized, chrismated, and communing members of the Body of Christ, and the models for us adults. It is not the children who must grow up and become like adults to be baptized and saved. On the contrary! It is the adults who must become like children if they hope to be saved.