Our blessed hierarchs have asked that we cancel all non-liturgical, in-person activities at our parish and limit attendance at all services to no more than 5 people. For those unable to attend services in person due to these restrictions, you can listen to services over the phone at (617) 941-8945 or watch our livestream. Please see our service schedule for times of livestreams and calls.

Worship in the Orthodox Church often seems strange, especially to other Christians. You’ll notice many of these differences in worship the moment you enter the church, while others you may not notice for quite some time. Here we lay out eight things you should expect during your first visit to an Orthodox Church.

When you walk into an Orthodox Church, you’ll first enter the narthex, or vestibule. Here, you may see people lighting candles, venerating icons, or writing down names of people they would like the priest to pray for during services. Once you cross into the main worship area (the nave), you’ll see even more activity: the altar servers lighting votive candles and vigil lamps; the priest walking throughout the church with a censer full of incense; the choir singing hymns; newcomers walking about the temple venerating icons before they make their way to their spots. In Orthodoxy, we call this activity holy noise.

On time, but late?

If you show up right when services are supposed to start, you might notice that stuff is already happening. The choir might be singing, or the priest intoning a prayer. This is perfectly normal!

Expect to see the sign of the cross constantly when you enter an Orthodox church. Traditionally, we cross themselves whenever the clergy, choir, or congregation invokes the name of the Holy Trinity. We also make the sign of the cross when venerating icons or the cross itself, before receiving communion, and on many other occasions.

How do the Orthodox cross themselves?

In the Orthodox tradition, we cross ourselves with our right hand. We join our thumb, index, and middle fingertips and rest the ring and “pinky” fingers against our palm. First we touch the joined fingertips to our foreheads, then our abdomen. After this, we touch our right shoulder, and then the left. (This is the opposite of Roman Catholics and some Protestants.)

The arrangement of the fingers is incredibly important. Crossing yourself correctly takes time, especially if you have crossed yourself differently in the past. Again, don’t worry! We won’t make fun of you! Here as elsewhere, we follow our impulse to make everything we do reinforce the Faith. Can you figure out the symbolism behind the way we arrange the fingers? 😉

Some Orthodox may cross themselves three times in a row. Others may finish the sign of the cross with a sweep of their right hand along the floor. They may also cross themselves at different times. All of this can be incredibly confusing at first. But don’t worry. No one expects you to get everything right the first time. Nor do they expect you to follow suit if it makes you uncomfortable.

Another thing you should expect is quite a bit of standing during services in an Orthodox church. The faithful stand the majority of the time.

Our services usually last between one and two hours. The Liturgy of St. John Chrysostom, used in most Orthodox churches on most Sundays of the year, lasts about an hour and a quarter, including a ten to fifteen minute sermon. Services during Lent (the fasting period before the Resurrection) can run a bit longer, sometimes between two and a half to three hours. Standing for all this time can easily intimidate newcomers.

Not to worry! Most churches will have some chairs or pews if you find the amount of standing too challenging. No one will think any less of you. Honestly, they probably won’t notice. After all, that is what prayer is about. Inward focus on God and the divine, not on what your neighbor is or isn’t doing.

The Orthodox don’t typically kneel during services, except during weekday services throughout Great Lent. Since kneeling is penitential, we do not kneel on regular Sundays. (Sunday is a day of rejoicing, the Day of the Resurrection.)

In Orthodox tradition, we also prostrate at times. Unlike Roman Catholics who lie flat on the floor, the Orthodox kneel, place our hands on the floor and touch our foreheads to the floor between our hands. Sometimes we do this and get right back up again. Other times we get down and stay there awhile.

Not everyone does this, so please do not feel obligated to mimic anyone who prostrates. No one will notice. In Orthodoxy, you will find a wider acceptance of individualized expressions of piety, rather than a sense that people are watching you and getting offended if you do it wrong.

When you visit an Orthodox church, expect to see many painted pictures on the walls. Some churches have these pictures on every conceivable surface! These painted pictures of Christ, the Virgin Mary, and the saints are called icons, and they are an important part of Orthodox spiritual life.

Icons mean far more to us than ordinary paintings. They serve as windows into the sacred realm of heaven, into the kingdom of God. The persons portrayed on these wooden icons are, in a spiritual way, present with us. So, do not be alarmed if you see Orthodox Christians crossing themselves in front of the icons and kissing them.

#5. Everyone facing “the East”

Earlier we talked about venerating. When we “venerate” something, that usually means we cross ourselves and kiss it. When you go to an Orthodox church, expect a lot of this.

The Orthodox love to venerate things. When we enter the church, we kiss the icons of Jesus, the Virgin Mary, and other saints. We kiss the relics of saints as well. Some Orthodox kiss the hems of the priest’s vestments as he passes by during the Great Entrance, while others kiss the chalice after receiving communion. We all kiss the cross after Liturgy concludes. Altar servers (acolytes) also kiss the hand of the priest when he takes something from their hands, such as the censer.

You may also notice different cultural displays of kissing as a greeting. In the East, the kiss is the standard. Greeks and Arab kiss once on each cheek, and Slavs return to the first cheek for a third kiss. This may be unfamiliar to those of you used to Western greetings like the handshake.

Nearly three quarters of any given service is sung. The parishioners in Orthodox churches absolutely love to use their voices to sing to the Lord, so expect to hear a lot of it!

A choir typically leads the people in a Capella harmony, though some churches (mostly Greek Orthodox) may have an organ as well. In some parishes, the congregation does very little singing, and allows the choir to do most of it. In others, the entire congregation will join in. Depending on the Archdiocese, musical style also varies. In an Antiochian church, music is chanted in a Middle-Eastern style. But in a Russian or Serbian Orthodox church, you might hear four-part harmonies. Our particular church mixes many styles together to create an eclectic liturgical sound.

This constant singing is a little overwhelming at first, but you’ll soon notice that the songs stay mostly the same from week to week. Before long, you’ll find you’ve memorized them. Then you can connect with God on a deeper level, which is what worship is all about!

The Orthodox Church believes the Eucharist is a sacred sacrament, a family meal shared between those who are under the same Bishop, or another Bishop with whom he is in Communion. Simply put, this means Orthodox Christians practice inter-Communion with other Orthodox, but not with Protestants or Roman Catholics whose church leaders are not in Communion with Orthodox Bishops. (We call this practicing monogamous communion.)

Only baptized Christians confirmed in the Orthodox Faith who have prepared themselves (through penance and fasting) may approach the priest for Communion. The Orthodox believe Communion is the literal Body and Blood of the Lord Jesus Christ. It is holy beyond our comprehension; it is the Church’s treasure and must be protected. That is why it is reserved only for those who unite themselves with the Church.

Thus, the fact that Communion does not extend to persons from other Christian groups is not meant as an insult. All visitors are invited, at the end of the service, to approach the front to receive from the priest a piece of “blessed bread.”

As we wrap up, one last thing. Even those who are not Orthodox (or even Christian for that matter) are more than welcome to attend an Orthodox service. We are always overjoyed when someone joins us for worship and experiences the beauty of the Orthodox Holy Tradition. And don’t worry – you do not have to be Greek, Serbian, Antiochian, Russian, etc. to attend one of those Orthodox churches!

Because the services differ from Protestant and Roman Catholic services, it is probably a good idea to contact someone at the parish (via Facebook or through their website) and tell them you intend to visit for worship. The priest will see that someone from the parish greets you and helps you find your way through the Service Book. 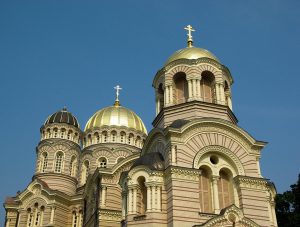