How and When to Make the Sign of the Cross 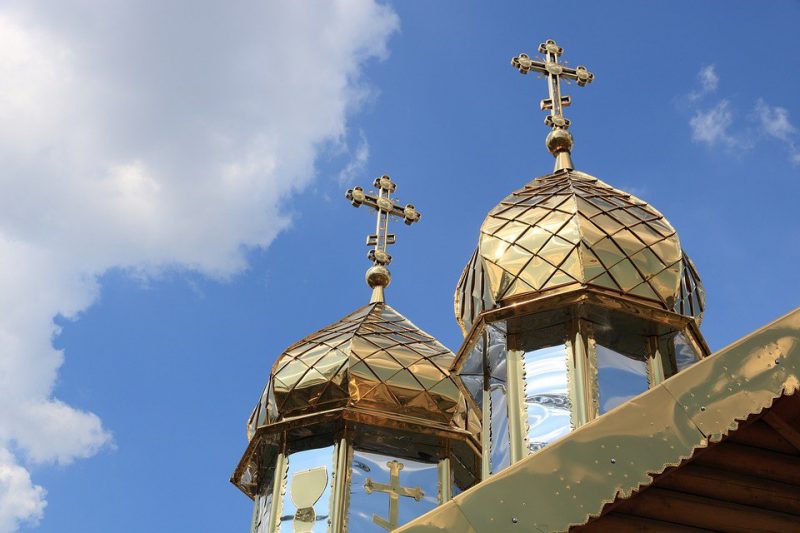 When you enter an Orthodox Church, one of the first things you’ll notice is someone making the sign of the Cross. A person may do this as he venerates an icon. Alternatively, she may do so as she passes into the main area of the church, or as the priest censes the congregation. You may also notice the way the Orthodox make the sign of the cross is a bit different than you might have seen in other Christian communities. In this post, we explain the meaning of the sign of the Cross, its origins, and when, how, and why Orthodox Christians use it in worship.

As the instrument Christ chose to bring about His ever-memorable and life-creating death, the Cross holds a special place in the heart of every Orthodox Christian. We understand that this symbol, once a primitive means of torture and capital punishment, now reminds us of Christ’s victory over death. Orthodox Christians make the sign of the Cross because it affirms what we believe about Christ as the Incarnate Son of God and all that He did for us. It is an outward manifestation that illustrates our view of God in Trinity (Father, Son, and Holy Spirit) and our belief in the two natures of Christ (fully God and fully Man). It is, in essence, a physical form of prayer.

Because of our love for the sign of the Cross, the Orthodox use it daily. Not only do we use it during worship, but also before and after meals, during personal prayer, and in moments of worry or need. The saints, and Christ Himself, make this sign in holy icons. We love the cross perhaps just as much as we love the Theotokos, if not more. Because Christ used it to bring about our salvation. To show our love and devotion to Christ, during any given service or liturgy, the faithful may cross themselves close to one-hundred times!

The first mention of Christians making the sign of the Cross dates back to the 2nd Century. In the early Church, sources explain that the sign was only made upon the forehead and other objects, with only one finger, until at least the 4th century. Around this time, Christians then began to use two fingers to make the sign of the Cross, each finger representing one of the natures of Christ – fully God and fully Man. Historians believe they made the sign this way to guard against the heresy of Monophysitism, which rejected the Council of Chalcedon (451) and claimed that Christ had only one divine nature. We still do not know if this was a universal custom, or something confined to the region of Antioch, the location from which these primary sources came.

Around the 9th century, the practice of using three fingers became prevalent in most of the Orthodox East and West. The exact point of origin for the three-fingered sign of the Cross remains a mystery. However, we do know it was present prior to the Great Schism (1054) because of the writings of Pope Leo IV, who reposed in 855 A.D., nearly two-hundred years before the schism between the Orthodox East and Latin West. Others including Aelfric, Abbot of Eynsham in England, and Pope Innocent III have also described the sign of the Cross in the same way as Pope Leo IV.

By the 12th century, most churches in the East (with the exception of the Russian Church, which accepted the practice in the 1600s) adopted the practice of making the sign of the Cross with three fingers. Interestingly, the Monophysites, Copts, Syrians, Armenians, and Ethiopians also adopted this practice.

If you’ve ever come to an Orthodox service and looked around, you probably saw someone crossing themselves at some point. To newcomers and inquirers, this can be a bit strange, since we cross ourselves differently than other Christians. Let’s walk through the Orthodox way of making the sign of the cross, step by step.

You may also have noticed some Orthodox Christians make the sign three times in a row, while others only do it once. Some make large sweeping motions, while others keep things simple and small. All these variations! But, which way is the right way?

Put simply, there isn’t one. Crossing yourself is not an issue of dogma (belief necessary for salvation) in Orthodoxy. Instead, it is a matter of personal piety. In other words, aside from the arrangement of the fingers and direction of the movement, all else is up to you. If you feel moved to always make the sign of the cross in three’s, you may do so. If you wish to venerate icons in a slightly different manner than another parishioner, you can. Each Orthodox Christian can express his or her faith in whatever physical ways they feel necessary, as long as they do so out of love for God. (If you do things instead to bring attention to yourself and feed your pride, you should reflect upon that.)

Why make the sign of the cross this way?

The arrangement of the fingers while making the sign of the cross is incredibly important. Why? Because the sign is an outward manifestation of inward belief, proclaiming Truth in a demonstrable way. The three fingers joined together above the palm symbolize the Holy Trinity (Father, Son, and Holy Spirit). Meanwhile, the ring and “pinky” figure represent the two natures of Christ. These two fingers come down to touch the palm of the hand, which symbolizes Christ descending to earth.

The Orthodox follow an impulse to make everything we do reinforce and proclaim the Faith. The sign of the cross is no exception.

During any given liturgy, we may cross ourselves more than one hundred times!

The above is by no means an exhaustive list. We cross ourselves many other times as well. Again, it all comes down to personal choice. If the Holy Spirit moves you to express your piety in a particular way, no one will judge you or look at you strangely for it.

Though the Orthodox make the sign of the cross rather liberally, there are a couple times when we should not make the sign during services:

The sign of the cross means everything to the Orthodox Christian. It symbolizes a crucial event in the story of mankind’s salvation. And it allows the faithful to commune with God in a way that transcends understanding. So don’t be surprised if you see the sign of the cross being used the next time you visit an Orthodox parish! If you are not Orthodox, please don’t feel as though you must make the sign of the Cross. We make the sign out of our deep love for God, as a way of expressing with our bodies our faith in Him. You need not make the sign until you, too, feel such conviction.

*Notice we mentioned Communion in both lists? Here’s why! If you cross yourself too close to the chalice, you might hit the chalice with your hand, or cause some of the Body and Blood of Christ to spill. However, it is okay for you to cross yourself before approaching the chalice and after backing away to receive blessed bread.