Home » Feast Days » The Raising Of Lazarus From The Dead

The Raising Of Lazarus From The Dead 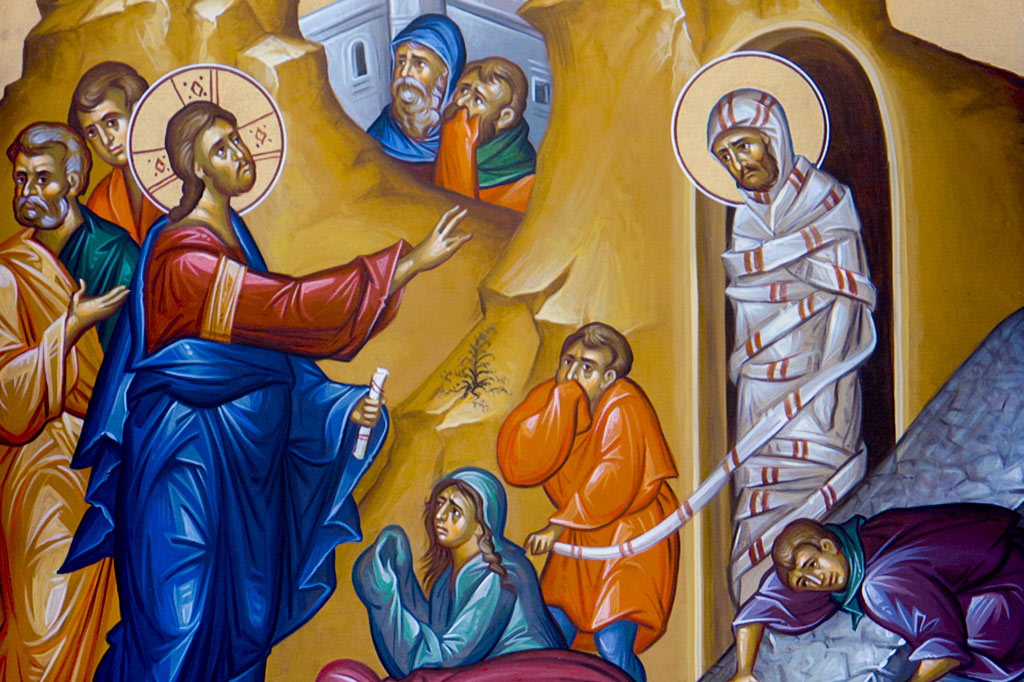 On the day before Palm Sunday (and the start of Holy Week), the Eastern Orthodox Church celebrates what we call Lazarus Saturday. On this day, we remember Christ’s raising of His dear friend Lazarus from the dead, after he had been dead four days. This feast marks the end of the forty days of Great Lent and serves as a unique transition into our Lord’s Passion. In triumph and joy, the Church bears witness to Christ’s power over death and exalts Him as King before entering the most solemn week of the year, one that leads the faithful in remembrance of His suffering and death and concludes with the great and glorious Feast of Pascha.

Celebration of the Feast

Having fulfilled Forty Days […] we ask to see the Holy Week of Thy Passion. With these words sung at Friday Vespers, Lent comes to its end; and we enter into the annual commemoration of Christ’s suffering, death and Resurrection. Liturgical texts describe the double feast of Lazarus’ resurrection and the Entrance of the Lord to Jerusalem (Palm Sunday) as the “beginning of the Cross”. Therefore, we must understand this Feast in the context of Holy Week. The Troparion of these days explicitly affirms that by raising Lazarus from the dead, Christ confirmed the truth of universal resurrection. Light and joy shine not only at the end of Holy Week but also at its beginning; they illumine darkness itself and reveal its ultimate meaning.

All those familiar with Orthodox worship know the peculiar, almost paradoxical character of Lazarus Saturday services. It is a Resurrection service on a Saturday, a day usually devoted to the liturgical commemoration of the dead. And the joy which permeates these services stresses one central theme: the upcoming victory of Christ over Hades. Hades is the Biblical term for Death, for that unescapable darkness and destruction that swallows all life and poisons the world with its shadow. But now—with Lazarus’ resurrection—death begins to tremble. Here, the decisive duel between Life and Death begins, and it gives us the key to the mystery of Pascha. In the early Church, Lazarus Saturday was called the “announcement of Pascha”; it announces and anticipates, indeed, the wonderful light and peace of the next Saturday—the Great and Holy Saturday, the day of the Lifegiving Tomb.

The Raising Of Lazarus In Scripture

We find this powerful story in the Gospel of John 11:1-45. Lazarus becomes ill, and his sisters, Mary and Martha send a message to Jesus. In response, Jesus says, “This illness does not lead to death; rather it is for God’s glory, so that the Son of God may be glorified through it” (vv. 1-4).

Instead of going immediately to Bethany, the town where Lazarus lived, Christ remained where he was for two more days. Only then did He return to Judea with His disciples, who tried to convince Him not to go for fear of the Jews who had recently tried to stone Him (John 10:31). Jesus comforts them and then explains that Lazarus has fallen asleep and that He must go to wake him. The disciples, mistakenly thinking the Lord meant Lazarus was simply sleeping, wondered why Jesus would go to wake him. This led to Jesus telling them directly that Lazarus was, indeed, dead.

Martha and Mary greet the Lord

When Martha, one of Lazarus’ sisters, heard that Jesus was approaching, she went to meet Him. She said to Him, “Lord, if you had been here, my brother would not have died. But even now I know that God will give you whatever you ask of Him.” Jesus told her that her brother will rise again. Martha said she knew he would rise again in the resurrection on the last day.

But Jesus corrected her and said, “I am the resurrection and the life. Those who believe in me, even though they die, will live, and everyone who lives and believes in me will never die.” Jesus asked Martha if she believed this. And she said to Him, “Yes, Lord, I believe that you are the Messiah, the Son of God, the one coming into the world” (vv. 17-27).

After this, Martha returned to tell Mary that Jesus had come and was asking for her. Mary went to Him, followed by those consoling her. The mourners followed her, thinking she was going to the tomb to weep there. When she came to Jesus, she fell at His feet and said, “Lord, if you had been here, my brother would not have died.”

Jesus saw her weeping and those who were with her, and He was deeply moved. He asked to be taken to the tomb of Lazarus. As Jesus wept, the Jews said, “See how He loved him.” Others wondered that if Jesus could open the eyes of the blind, He certainly could have kept Lazarus from dying (vv. 28-37).

Jesus came to the tomb and asked that someone move the stone from the door. Martha remarked that Lazarus had now been in the tomb for four days and that there would be a stench. Jesus replied, “Did I not tell you that if you believed, you would see the glory of God?” They took the stone away. Then Jesus looked toward heaven and said, “Father, I thank You for having heard me, but I have said this for the sake of the crowd standing here, so they may believe that You sent Me.” When He had said this, He called out with a loud voice, “Lazarus, come out!” Lazarus walked out of the tomb, bound with the strips of burial cloth, and Jesus said, “Unbind him, and let him go” (vv. 38-44).

According to ancient Jewish Tradition, the soul remained near the body for only three days. As a result of this miracle, many of the Jews present came to believe in Jesus. Christ performs this miracle to reassure His disciples that though He will suffer and die, He is still Lord and Victor over death. The resurrection of Lazarus is a prophecy in the form of an action. It foreshadows Christ’s own Resurrection eight days later, and at the same time it anticipates the resurrection of all the righteous on the Last Day: Lazarus is “the saving first-fruits of the regeneration of the world.”

The symbolism behind raising Lazarus

Lazarus, as the friend of Christ, serves as a symbol for all of mankind. As beings made in the image of God, we are all called to divine friendship with Him: knowledge of God, communion with Him, and sharing of life with Him. “In Him was life and the life was the light of men” (John 1:4). And yet death (which God didn’t create) destroys and annihilates His creation.

But why does Christ weep if He knows that in a moment He will call Lazarus back from the dead? Because He contemplates the triumph of death and destruction in the world He created. At the grave of Lazarus, God encounters Death. He meets His Enemy, who has taken away from Him His world and become its prince. And we who follow Jesus enter with Him into that hour, into the climax and fulfillment of His work.

The Cross, its necessity and universal meaning are announced in the shortest verse of the Gospel: “and Jesus wept”. It is because He wept, i.e., loved Lazarus, that Jesus had the power of calling him back to life. The power of Resurrection is not a divine “power in itself,” but the power of love, or rather love as power. God is Love and Love is life. And Love creates Life. It is Love that weeps at the grave and it is Love that restores life. In Christ’s Divine tears, love is at work again —recreating, redeeming, restoring the darkened life of man. And this is why Lazarus Saturday is the beginning of both: the Cross, as the supreme sacrifice of love, and the Resurrection, as the ultimate triumph of love.

Keep Reading: What Happens After We Die?