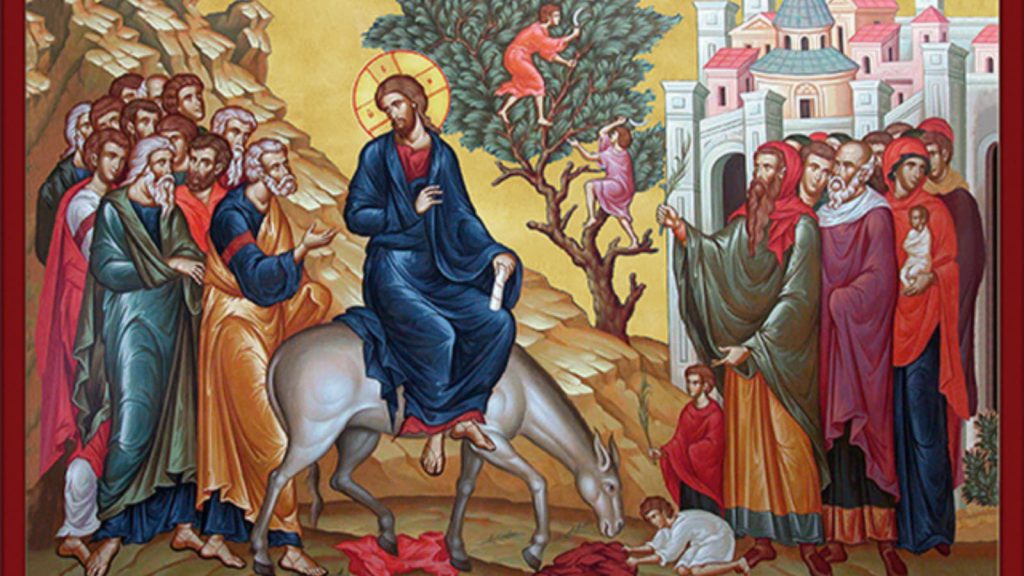 On the Sunday before the Feast of Great and Holy Pascha (known as Easter in the West), the Orthodox Church celebrates one of its most joyous feasts of the year. Palm Sunday is the celebration of the Entrance of our Lord into Jerusalem following His raising Lazarus from the dead. Having anticipated His arrival, the people went out to meet the Lord and welcomed Him with displays of honor and shouts of praise. On this day, we receive and worship Christ in this same manner, acknowledging Him as our King and Lord.

Palm Sunday in the Scriptures

We can find the story of Palm Sunday in all four of the Gospels (Matthew 21:1-11; Mark 11:1-10; Luke 19:28-38; and John 12:12-18). Five days before the Passover, Jesus came from Bethany to Jerusalem. Having sent two of His disciples to bring Him a colt of a donkey, Jesus sat upon it and entered the city. People had gathered in Jerusalem for the Passover and were looking for Jesus, both because of His great works and teaching and because they had heard of the miracle of the resurrection of Lazarus. When they heard that Christ was entering the city, they went out to meet Him with palm branches, laying their garments on the ground before Him, and shouting, “Hosanna! Blessed is He that comes in the Name of the Lord, the King of Israel!”

The significance of Christ’s Entrance into Jerusalem

Palm Sunday calls us to behold the Word of God, the Giver of Life and the Vanquisher of Death, made flesh. It reminds us that He is always present with us (Matthew 28:20) in His Church, coming ceaselessly to us in power and glory at every Eucharist, in every prayer and sacrament, and in every act of love, kindness and mercy. He comes not only to deliver us from sin and death, but also to make us capable of attaining perfect communion with Him. He is our King, who liberates us from the darkness of sin and the bondage of death.

In the fleeting moments of exuberance that marked Jesus’ triumphal entry into Jerusalem, the world received its King, who was on His way to the Cross, to accomplish the mission for which the Father sent Him. Filled with infinite love for the Father and the Holy Spirit, and for creation, Jesus accepted the infinite abasement of the Cross. He bore our griefs and carried our sorrows; He was wounded for our transgressions and made Himself an offering for sin (Isaiah 53). His glorification, which was accomplished by the resurrection and the ascension, was achieved through the Cross.

Secondly, Palm Sunday calls us to see the Kingdom of God as the goal of our Christian life. We draw our very identity from Christ and His Kingdom. The Kingdom does not lie somewhere or sometime in the distant future; rather, the Kingdom is a present reality and a future realization at the same time (Matthew 6:10). Moreover, the Kingdom is within us (Luke 17:21). Theophan the Recluse wrote:

The Kingdom of God is within us when God reigns in us, when the soul in its depths confesses God as its Master, and is obedient to Him in all its powers. Then God acts within it as master ‘both to will and to do of his good pleasure’ (Philippians 2:13). This reign begins as soon as we resolve to serve God in our Lord Jesus Christ, by the grace of the Holy Spirit. Then the Christian hands over to God his consciousness and freedom, which comprises the essential substance of our human life, and God accepts the sacrifice; and in this way the alliance of man with God and God with man is achieved, and the covenant with God, which was severed by the Fall and continues to be severed by our willful sins, is re-established.

After Divine Liturgy, the Church blesses and distributes palms to the faithful. Orthodox Christians who live in areas without palms, including the Russian Orthodox, use pussy willow branches rather than palms. Therefore in Russian Church this feast is called Вербное (Pussy Willow) Воскресенье (Sunday). Some churches give small crosses made of palms at the end of the service that the faithful take home and keep in their home icon corner.