Home » Spiritual Life » Why Do Orthodox Christians Pray For The Dead?

Why Do Orthodox Christians Pray For The Dead? 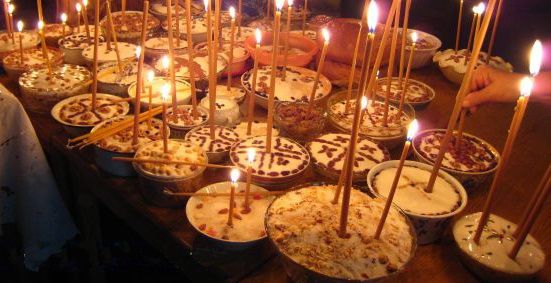 This post explains the Orthodox practice of prayer for the dead. We also explain the tradition of blessing and eating “memorial wheat” in the Orthodox Church.

Prayer for the dead is biblical

First and foremost, the Orthodox pray for the dead because the Bible tells us to. As members of the Church, the Body of Christ, we are exhorted to pray for one another (James 5:16). Whether we live or die, “we belong to the Lord” (Romans 14:8). For we are “members of His Body, of His flesh and of His bones” (Ephesians 5:30). The Church is “the heavenly Jerusalem, the city of the living God”. As such, she includes “tens of thousands of angels” and “the spirits of righteous people made perfect” as well as those of us alive on earth (Hebrews 12:22-24).

Because of Christ’s resurrection and victory over death, death does not end our membership in the Body of Christ. For neither “death nor life […] will separate us from the love of God in Christ Jesus our Lord” (Romans 8:38-39). The Orthodox remember that God “is not the God of the dead, but of the living – for all are alive to Him (Luke 20:38). Therefore, we pray for both the living and for the “dead in Christ” (1 Thessalonians 4:16).

Keep Reading: What Happens After We Die? >>

Examples of prayer for the dead in Scripture

The most notable examples of prayer for the dead in Scripture are perhaps Judas Maccabaeus and Saint Paul the Apostle.

Judas Maccabaeus offered sacrifices and prayers for his fallen soldiers with the future resurrection of the dead in mind. As he said: “It is therefore a good and wholesome thought to pray for the dead, so they may be set loose from their sins” (2 Maccabees 12:39-46). Most Protestant Bibles don’t include this book as part of the canon. However, both the Orthodox and Roman Catholic canons use the Septuagint version of the Old Testament cited by Christ’s apostles in their writings.

Secondly, we have the Apostle Paul, who prays for his departed friend Onesiphorus. As he writes: “May the Lord grant that he find mercy from the Lord” on Judgment Day (2 Timothy 1:16-18). And so the Orthodox do likewise!

The nature of death after Christ’s victory

We can see from the verses above that we remain alive to God and part of His Church, even if we are dead to this world. Death is the parting of our souls and bodies, not the end of our existence or the obliteration of our personhood. The Bible bears witness that our souls live on after death, both conscious and active after our earthly lives (Luke 16:19-31; Revelation 6:9-10). For this reason, the Church speaks biblically of the dead as those who have “fallen asleep” (1 Corinthians 15:18; 1 Thessalonians 4:13-16), for they are destined to awake and rise on Judgment Day.

With an eye toward the resurrection of the dead and the life of the age to come, we ask God who gives life to the dead, to keep them in His eternal memory and grant them mercy, peaceful rest, forgiveness of their sins, and a good answer for themselves before the awesome judgment seat of Christ.

The English word cemetery comes from the Greek word koimeterion, “a place for sleeping”, from the root word koimisis, “sleep”.

As Orthodox Christians, we have hope in Christ both in this life and in the age to come. As He tells us: “I am the One who lives, and became dead, and behold I am alive for ages and ages […] And I hold the keys of death and death’s underworld” (Revelation 1:18-19). So, the Orthodox turn to Him in prayer for both the living and the dead, as the church has always done.

The custom of memorial wheat is one of many examples of how Orthodox Christian worship of the Church appeals to all five sense of the human being to make us aware of God’s truth, grace, and life in our lives.

During prayer services for the dead, we bless and share memorial wheat. You may have heard it called grure (Albanian), ameh (Arabic), kollyva (Greek), or kolyvo or zhito (Serbian). Recipes for the memorial wheat vary by location and family; but each recipe has at least three basic ingredients:

The wheat kernels remind us of Christ’s words about death and resurrection: “Unless a kernel of wheat falls into the ground and dies, it remains a single seed, but if it dies it brings forth much fruit” (John 12:24). Secondly, the fruit symbolizes the risen Christ, the “first fruits” of the dead, whose resurrection brings our own (1 Corinthians 15:22-24). And the sweetener reminds us of the sweetness of the afterlife that awaits those who follow Christ, the Wisdom of God. “For wisdom is sweet to your soul; if you find it, there is future hope for you, and your hope will not be cut off (Proverbs 24:14).

When we eat our serving of wheat, we offer a brief prayer for the person being remembered: “May God forgive them.”

To sum up, the practice of praying for the dead is indeed biblical, and has been part of the Christian life for millennia. The Orthodox Church keeps this practice alive to this day, along with the tradition of blessing and eating memorial wheat. These things remind us of the power of Christ’s resurrection – that death is not the end for those who believe in Him.

Keep Reading: Why The Orthodox “Pray To” Saints >>