The Orthodox Church’s Teachings on War 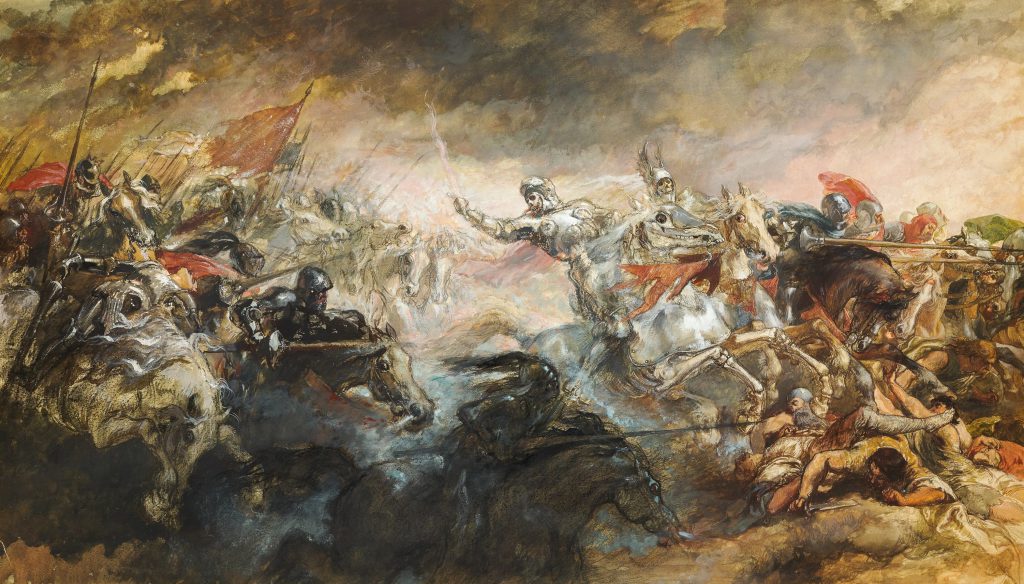 During the Divine Liturgy, the Orthodox clergy always pray “for the peace of the whole world”. But then moments later, they exhort us to pray for our “country, the president, our leaders, and our armed forces” (emphasis ours). How can Orthodox Christians pray for peace and at the same time pray for the armed forces? Isn’t this a bit of a conundrum? In this post, we explore the Orthodox Church’s teachings on war, a controversial topic in our present time.

When we speak of war, we first must clarify that there are two kinds of wars: offensive and defensive. In principle, the Orthodox Church always condemns the former, while only condemning the latter most of the time. Let’s explore this a bit more deeply.

Is there ever justification for it?

Orthodoxy makes clear that offensive war and violence are never the means by which God achieves justice. This is particularly true when nations wage war “in the name of religion”. Patriarch Bartholomew of Constantinople adds to this that only “in a few specific cases the Orthodox Church forgives an armed defense against oppression and violence” (Cosmic Grace – Humble Prayer, 2003). Moreover, he proclaims it is better “to be treated with injustice ourselves than to do injustice to others” (ibid.) Likewise, Saint John Chrysostom teaches that changing the minds of our enemies and bringing about a change of soul is far more wonderful than killing them.

On the other hand, it is our moral obligation to defend our nation when threatened. As Saint Athanasius the Great states that although “it is not permissible to murder anyone (cf. Ex. 20:13), yet in war it is praiseworthy and lawful to slay the adversaries” (First Letter to Amoun). Saint Basil the Great, however, reflects on this: “Our Fathers did not consider killings committed in the course of wars to be classifiable as murders at all, on the score, it seems to me, of allowing a pardon to men fighting in defense of sobriety and piety. Perhaps, though, it might be advisable to refuse them communion for three years, on the ground that they are not clean-handed” (Canon 13 of St. Basil, The Rudder).

There is a certain justification in Orthodox Christians taking up arms. As St. Nicodemus the Hagiorite explains: “If once the barbarians and infidels should succeed in gaining the upper hand, neither piety will be left, since they disregard it and seek to establish their own wicked faith and bad belief, now sobriety and maintenance of honor, seeing that their victory would be followed by many instance of violation and ravishment of young women and of young men. (interpretation of canon 13)

In this imperfect world, sometimes we have no choice between good and evil. Instead, the choice becomes one of evil versus lesser evil. Justifiable war inevitably falls in that “lesser evil” category for the Orthodox Church. War is never good. But it has become a necessary wickedness in this fallen world.

Nevertheless, Christians must bless those who persecute us (Rom. 12:14) and love our neighbors as ourselves – not kill them. This is why the Orthodox Church does not allow her clergy to serve in the armed forces, nor does she allow those who have served (and killed another) cannot become members of the clergy (Canon 7, 4th Ecumenical Council; Canon 83 of the Apostles, etc.). Moreover, should a priest “fall into the defilement of murder even involuntarily” (i.e. self-defense), he will be deprived of the grace of the priesthood. Why? Because those whose hands have shed blood can no longer serve as icons of Christ and cannot prepare the Holy Gifts.

The teachings of our Lord Jesus Christ tell us to live in harmony with God and with one another. They instruct us to return good for evil, leave retribution to God, and “turn the other cheek”. Despite our reluctance, Christ would much rather we suffer injustice ourselves than be the cause of it. We must deal with injustice righteously and seek ways to peacefully influence the enemy to change and repent. If we cannot, the most we can do is defend ourselves, without seeking to harm the enemy beyond what is necessary to stop the attack. In summary, the Orthodox Church teaches that war is a lesser, necessary evil, and that those who take life should repent, confess their sins, and abstain from Holy Communion for a time.