Home » Feast Days » The Dormition Of The Theotokos

The Dormition Of The Theotokos 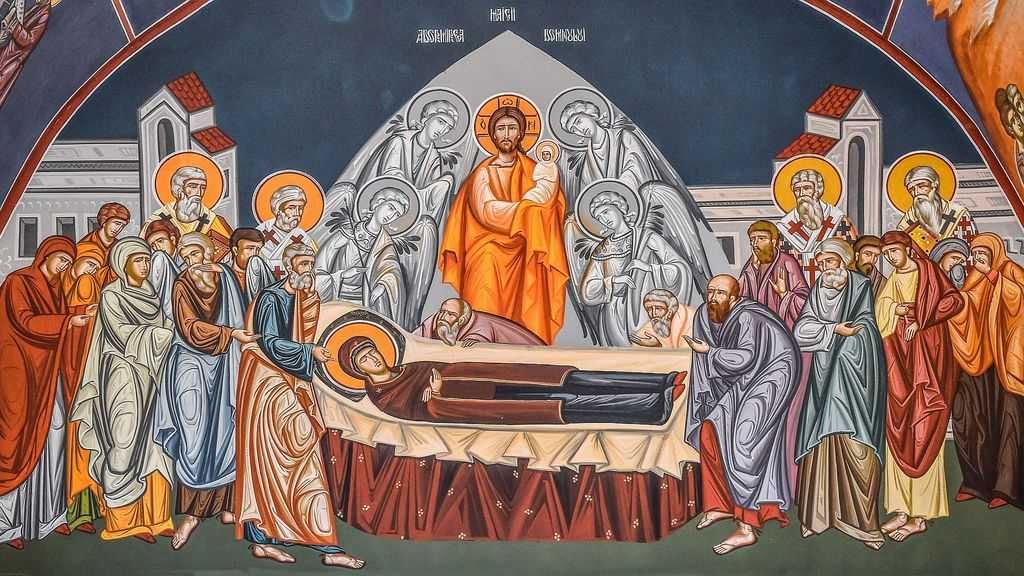 In the Orthodox Church, we celebrate the Feast of the Dormition of Our Most Holy Lady, the Theotokos and Ever-Virgin Mary every year on August 15th (August 28th on the Julian calendar). This Feast commemorates her repose (Gr. kimisis, or “falling asleep”). We sometimes refer to this Feast as the Assumption, because it proclaims that Mary has been “assumed” by God into the heavenly kingdom of Christ in the fullness of her spiritual and bodily existence.

About the Dormition of the Theotokos

According to Orthodox Tradition, the Theotokos died as all people die: not voluntarily, but by necessity of her mortal human nature. At the time of her death, the Lord miraculously transported the Apostles, who were preaching throughout the world, to her side. Other bishops and women from the Church in Jerusalem joined them. The sole exception was Thomas, who was preaching in India at the time. Jesus Christ Himself descended upon her death and carried her soul (the small figure wrapped in white in the icon below) into heaven.

The faithful took her body and laid it in a tomb near the Garden of Gethsemane, at her request. Three days after her death, Thomas arrived in a cloud above her tomb, where he saw her body going to heaven. He asked her, “Where are you going, O Holy One?” She then took off her girdle and gave it to him saying, “Receive this, my friend,” and disappeared. Thomas went to his fellow apostles, whom he asked to see her grave, so that he could bid her goodbye. When they arrived at the grave, her body was gone, leaving a sweet fragrance.

Her bodily assumption was confirmed by the message of an angel and by her appearance to the Apostles. Orthodox theology teaches that the Theotokos has already undergone the bodily resurrection, which all will experience at the second coming. She stands in heaven in that glorified state which the other righteous ones will only enjoy after the Last Judgment.

Is the Theotokos’ Dormition in the Scriptures?

As with the Mother of God’s nativity and her entrance to the temple, there are no biblical sources for the Feast of her Dormition. However, Orthodox Holy Tradition maintains that the Virgin died in a state of spiritual peace. Some historical sources and old Apocryphal writings attest to this. For example, Hippolytus of Thebes, a 7th- or 8th-century author, claims in his partially preserved chronology to the New Testament that the Virgin Mary lived for 11 years after the death of Jesus, dying in AD 41. But neither the Orthodox Church nor other Christian confessions regard these writings as having any Scriptural authority.

We do know that her dormition did happen, for even the Theotokos truly needs a Savior. While she did not commit any personal sins, she was still subject to trials, suffering, and death. She truly died and was raised up by her Son as the Mother of Life and participates already in the eternal life of paradise. All who “hear the word of God and keep it” receive this promised life in paradise (Luke 11:27-28).

Where did the Tradition come from?

Dormition traditions began to surface in manuscripts at some point in the late 5th century. We see the events of the Dormition of the Theotokos and her burial mentioned in several known apocrypha:

Christians did not celebrate the Dormition as a holy day until about the 4th or 5th centuries, when Emperor Maurice (582–602 A.D.) declared August 15th the date of the Feast of the Dormition.

The commemoration of and preparation for the Dormition of the Theotokos begin on August 1 with a period of fasting. A strict fast is followed on most of the days (no meat, dairy, oil, or wine), with the exceptions of fish on the Feast of the Transfiguration (August 6) and the day of the Dormition. Faithful can consume oil and wine on Saturdays and Sundays during the Dormition Fast.

On weekdays before the feast (except for Saturdays and the eves of the Transfiguration and Dormition), parishes either celebrate the Great Paraklesis (service of supplication) or the Small Paraklesis. In some places, the weekday services are similar to the services during Great Lent (with some variations). Many churches and monasteries in the Russian tradition perform the Lenten services on at least the first day of the Dormition Fast.

Celebrating the Dormition of the Theotokos

On the eve of the feast, the faithful celebrate Vespers, during which there are three Old Testament readings that have New Testament meaning. In Genesis 28:10-17, Jacob’s Ladder, which unites heaven and earth points to the union of God with men, realized most fully and perfectly in Mary the bearer of God. “How awesome is this place! This is none other than the house of God, and this is the gate of heaven!” In Ezekiel 43:27-44:4, the vision of the temple with the door to the East perpetually closed and filled with the glory of the Lord, symbolizes Mary. And Proverbs 9:1-11, identifies Mary with the “house” which the Divine Wisdom has built for herself.

Some parishes celebrate Matins on the morning of the feast. The Gospel reading is from Luke 1:39-49, 56, which we hear on all feasts of the Theotokos. It includes the Theotokos’ saying: “My soul magnifies the Lord and my spirit rejoices in God my Savior, for he has regarded the low estate of his handmaiden, for behold, henceforth all generations will call me blessed.”

After Matins, the priest leads the faithful in celebrating the Divine Liturgy. In some churches, it is the custom to bless flowers on this feast before the Liturgy. The epistle reading is from Philippians 2:5-11. It speaks of “Christ Jesus, who, being in the form of God, did not consider it robbery to be equal with God, but made Himself of no reputation, taking the form of a bondservant, and coming in the likeness of men.” The gospel reading is taken from Luke 10:38-42 and 11:27-28 together; this reading is also always read on all feasts of the Theotokos. In it, the Lord says, “blessed are those who hear the word of God and keep it!”

Significance of this beautiful Feast

This great Feast of the Church celebrates a fundamental teaching of our faith—the Resurrection of the body. It is a feast of hope, hope in Resurrection and life eternal. Like those who gathered around the body of the Virgin Mary, we gather around our departed loved ones and commend their souls into the hands of Christ. As we remember those who have reposed in the faith before us and have passed on into the communion of the Saints, we prepare ourselves to one day be received into the new life of the age to come.

We also affirm through this Feast that the Theotokos intercedes for us. Through Christ she has become the mother of all of the children of God, embracing us with divine love.

Read More: Was The Virgin Mary Always A Virgin?