Home » Doctrine » What’s The Difference Between Coptic and Eastern Orthodox?

What’s The Difference Between Coptic and Eastern Orthodox? 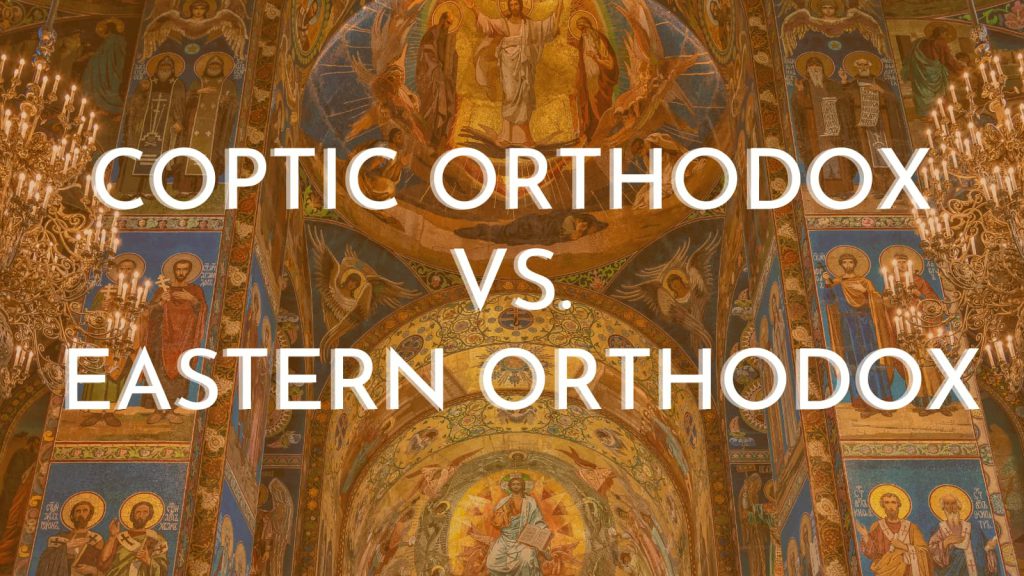 Newcomers to Orthodoxy are often surprised to discover that there are different kinds of Orthodox churches. Generally, there are two main confessions that label themselves “Orthodox”: the Oriental Orthodox (Non-Chalcedonian) Communion and the Eastern Orthodox Communion. Perhaps most well known in the former communion is the Coptic Orthodox Church, while the most well known in the latter communion is the Greek Orthodox Church. In this post, we’ll explore the difference between Coptic and Eastern Orthodox and explain why they are not in communion with one another. And we’ll try to keep things as simple as possible!

What is the Oriental Orthodox Communion?

The Oriental Orthodox Communion accepts the first three Ecumenical Councils. Moreover, these churches uphold the declaration of St. Cyril of Alexandria: that there is one incarnate nature of God the Word, a nature that is both fully human and fully Divine.

The Coptic Orthodox (also known simply as Copts) are part of this Communion, along with the Orthodox Churches of Ethiopia, Eritrea, Armenia, and the Syriac Orthodox Church (including the Malankara-Syriac Church of southern India). They are more commonly known as “Miaphysites” – a direct reference to their Christology – or simply as “Non-Chalcedonians”.

Who are the Copts?

The Coptic Orthodox Church is the main Christian Church in Egypt, where it has between 6 and 11 million members. While most Copts live in Egypt, the Church has around a million members outside Egypt; there are over 100 churches in the United States, along with a cathedral in the UK.

The word “Copt” comes from the Greek word ‘Aigyptos‘, meaning Egyptian. Therefore, it sometimes refers to all Egyptian Christians, not just members of the Coptic Orthodox Church.

Copts believe that their Church dates back to around AD 50, when, according to Tradition, the Apostle Mark visited Egypt. This essentially makes the Coptic Orthodox Church ones of the earliest Christian groups to exist outside of the Holy Land. To this day, the Coptic (along with Eastern) Orthodox continue to suffer persecution at the hands of Muslims.

The Coptic Orthodox Church is led by the Pope of Alexandria, based in Cairo. The current Pope, Tawadros II, succeeded Pope Shenouda III and is 118th in succession to St. Mark.

What is the Eastern Orthodox Communion?

The Eastern Orthodox Communion (to which our parish belongs) recognizes all Seven Ecumenical Councils. However, unlike Non-Chalcedonians, Orthodox Churches proclaim that Christ has two natures in hypostatic union. That He is both fully Divine and fully human.

Churches in the Eastern Orthodox Communion include not only the Greek but the Russian, Albanian, Georgian, Antiochian, Bulgarian, and Serbian Orthodox, along with a host of others.

Why are these Churches not in communion with each other?

In AD 451, the Fathers of the Church gathered in Council to reaffirm the doctrine of the Council of Ephesus against the heresies of Nestorianism and Monophysitism. In other words, this Council dealt with the highly controversial topic of Christ’s divine and human nature(s), or Christology. We will dive a bit deeper into this in the next section.

Ultimately, the Oriental Orthodox Churches rejected the Confession of Chalcedon, thus severing themselves from communion with the One Holy, Catholic, and Apostolic Church. In recent years, both sides have reassessed this dispute and its surrounding phraseology; however, communion still has not been re-established for several reasons, including the fact that Non-Chalcedonian churches do not accept any of the Ecumenical Councils past the Third.

The Confession of Chalcedon

The Confession of Chalcedon provides a clear statement on the two natures of Christ, human and divine:

One and the same Christ, Son, Lord, only begotten, to be acknowledged in two natures, inconfusedly, unchangeably, indivisibly, inseparably; the distinction of natures being by no means taken away by the union, but rather the property of each nature being preserved, and concurring in one Person and one Hypostasis, not parted or divided into two persons, but one and the same Son, and only begotten God, the Word, the Lord Jesus Christ; as the prophets from the beginning [have declared] concerning Him, and the Lord Jesus Christ Himself has taught us, and the Creed of the holy Fathers has handed down to us.

This clearly reaffirms the decisions of the Council of Ephesus and the pre-eminence of the Creed of Nicea (AD 325). It also canonizes as authoritative two of Cyril of Alexandria‘s letters and the Tome of Leo written against Eutyches in AD 449.

Why did the Copts reject this?

The Non-Chalcedonian Churches believed the Chalcedonian definition ambiguous and strongly opposed it because of its perceived similarities to Nestorianism. The heresy of Nestorianism greatly stressed the separation between the divine and human aspect in Jesus, which the Non-Chalcedonians perceived as a radical form of Dyophysitism (meaning “two natures”), the official position articulated at the Fourth Ecumenical Council.

Miaphysitism greatly stresses the inseparable union of the Divine and human aspects of Jesus into one nature. On its surface, this is not much contradictory to the Eastern Orthodox position of Dyophysitism. However, Miaphysitism can often evolve into Monophysitism, the belief that the Divine and human natures of Christ merged together. And, in fact, many Oriental Orthodox have the tendency to accept such heresy, mostly out of innocent ignorance. This is because of the complexity of the Greek words used to articulate these doctrines: ousia (essence), physis (nature), hypostasis (concrete reality/person), and prosopon (mask/person). Even in Greek, their meanings tend to overlap, which makes this disagreement one of technicality.

Below is a table illustrating the differences between these two beliefs.

The Miracle of St. Euphemia

The Dogmas of the Orthodox Church are accepted on the basis of “proven common experience” of the Church and divine intervention. The Orthodox Church is inherently unable to err because of the way the Faith is preserved. In the instance of the Fourth Ecumenical Council, the Church’s Confession was proven True by the power of God through one of His Saints.

For the Council, the 630 delegates gathered in the church of Saint Euphemia, where her holy relics were housed. With relatively equal representation on both sides, the meetings were quite contentious. The Fathers could not reach a decisive consensus. Therefore, Patriarch Anatolius proposed that the Council submit the decision of the Church dispute to the Holy Spirit, through St. Euphemia.

Both sides wrote down their confessions of faith on separate scrolls and sealed them. They opened the tomb of the Saint and placed both scrolls upon her bosom. Then, in the presence of the emperor Marcian (450-457), they sealed the tomb, putting on it the imperial seal and setting a guard for three days. During these days both sides imposed upon themselves strict fasting and prayer. After three days the patriarch and the emperor, in the presence of the Council, opened the tomb. In Saint Euphemia’s right hand, they found the scroll with the Orthodox confession, while the scroll of the heretics lay at her feet. And the Saint, as though alive, raised her hand and gave the scroll to the patriarch.

As a result of this miracle, many of the heretics repented and accepted the Orthodox confession. However, those who did not accept it effectively severed themselves from the Body of Christ.

Other “superficial” differences between Coptic and Eastern Orthodox

Aside from the major theological differences we discussed above, there are a handful of smaller things the Copts do differently than the Eastern Orthodox:

While the Coptic and Eastern Orthodox Churches share many dogmatic positions in common, they differ on a critical matter. However similar their positions may seem, the Holy Spirit guided the Church to articulating the correct Christological dogma: that Christ is fully God and fully Man, both natures distinct, yet united, preserved perfectly in one Hypostasis.