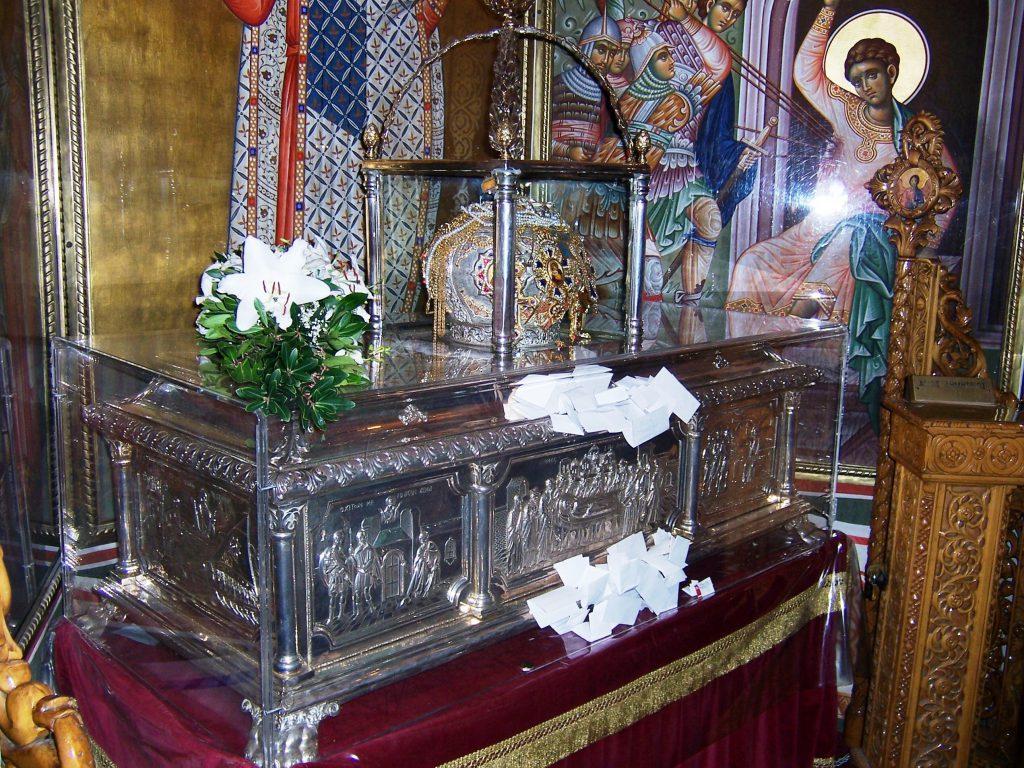 Relics are the earthly remains of saints, and in Orthodox Christian churches, we often venerate (but do not worship) them. A relic could be bodily remains (bone, clothing or vestments), other possessions that belonged to the saint, or instruments used in the torture or death of a saint. Additionally, the items of Christ’s Passion, like the True Cross, are also considered relics. In this post, we explain why Orthodox Christians venerate relics in their churches.

Contrary to what many people claim, Orthodox Christians do not worship relics. Instead, we venerate them. We take great care to distinguish veneration (Greek: doulia) from worship (Greek: latreia). In English, the two words have definitions people often treat as synonymous. However, in Greek, the official liturgical language of the Early Church, the two words have entirely separate meanings. Where worship means completely giving over oneself to service to God, veneration means simply treating something with reverence, respect, and honor. We afford both worship and veneration to God, but the only One we worship is God.

Why do the Orthodox venerate relics?

The Orthodox Christian practice of venerating relics reflects our beliefs of salvation. We understand salvation as theosis, or deification, becoming “partakers of the divine nature” (2 Peter 1:4). This is the primary reason the Incarnation happened, and why Christ voluntarily endured crucifixion and death. He did this so we could become by Grace what God is by nature. Our bodies are not prisons for our souls, but rather are temples of the Holy Spirit (1 Cor. 3:16-17; 6:15, 19; Eph. 2:19-22). Thus, God’s grace affects not only the spirit, but also the physical body. This is especially the case for Saints, who actively participate in God’s divine nature (“Saint” comes from the Greek hagiosis, which means, “the holy ones”).

Orthodox Christians venerate the relics of saints for several reasons: First, because we believe the body remains the temple of the Holy Spirit, even after death. Second, because veneration of a saint’s relics affirms the reality of his or her existence. Third, the act of veneration communicates that all Orthodox Christians, even those who have departed this life, remain in communion with God and with one another. Lastly, we do this to honor these saints as examples for how we should live our own lives to please God and achieve theosis. We also venerate their relics in the hope that we may somehow participate in the Grace they received. In other words, to have a share in their holiness.

Now that we’ve explained why Orthodox Christians venerate relics, we will take some time to address many of the questions we have received from people unfamiliar with this practice in Christendom.

Where’s the biblical evidence for relics?

In Orthodox Tradition, we adhere to the Old Testament as the basis for many aspects of our liturgical worship, including the veneration of relics. We see the ancient Israelites venerating relics and paying them incredible respect, so as Orthodox Christians we continue to do the same. The book of Exodus perhaps provides us with the best example: the Ark of the Covenant. For the Israelites, the Ark was the center of all formal worship and was kept in the Holy of Holies. All pious Jews held the Ark in great reverence, and were not allowed to touch it without God’s express permission. Why? Because the Glory of the Lord rested upon it, and within it, Aaron placed relics from the Exodus out of Egypt: a jar of manna (Exodus 16:33); the Decalogue or Ten Commandments (cf. Exodus 25:16; Deut. 10:1-5); and Aaron’s rod (Numbers 17:10).

Elsewhere in the Scriptures, we see the bones of Elisha bring a dead man back to life (4 Kings 13:21), handkerchiefs and aprons touched by Saint Paul healing the sick (Acts 19:11-12), and Saint Peter’s shadow passing over the sick and healing them (Acts 5:14-15). And in the Gospels, many healings involve relics, including the healing of the woman with an issue of blood, who simply touched the hem of Christ’s garment and received healing (Matthew 9:20-22, Mark 5:25-34, Luke 8:43-48. His garment effectively became an avenue of Grace (God’s energy/power) into her (Luke 8:46).

Many western Christians who reject the Orthodox practice of venerating relics often compare it to sorcery, because certain relics perform miracles. However, we must make a critical distinction. Sorcery implies the harnessing of a supernatural, demonic source and compelling it to act a particular way. Relics do not compel God, nor do they have any innate power to cause miracles. When relics perform miracles, this is simply because God wills it.

How do you know the relic is real?

Throughout its history, the Church has tried to remain vigilant in exposing fake relics. Many Church Fathers denounced those who preyed upon others with fake relics and took advantage of believers’ piety and faith. Augustine of Hippo often used miracles from relics as an apologetic tool to bring pagans to Christianity; at the same time, he condemned those who traded in counterfeit relics and masqueraded as monks. Additionally, the fifth Council of Carthage (389 A.D.) ordered bishops to remove altars raised over unauthenticated relics.

Unfortunately, it is difficult to prove – in a scientific sense – the authenticity of most relics. We can only establish the relative likelihood of its authenticity, and examine the relic’s history closely to establish it. Fake relics are not so much a problem in the Eastern Church as they are in Western Christianity. While we don’t know the precise reason for this, it may have something to do with the prominent role of icons in Orthodox spirituality.

Holy relics have a special place in the Orthodox spiritual life. We venerate relics as Orthodox Christians, but do not worship them. In venerating them, we pay honor and respect to the saint connected to the relic, and we deepen our understanding of the communion of the Body of Christ. Have you ever been in the presence of holy relics before? If so, what was it like for you?