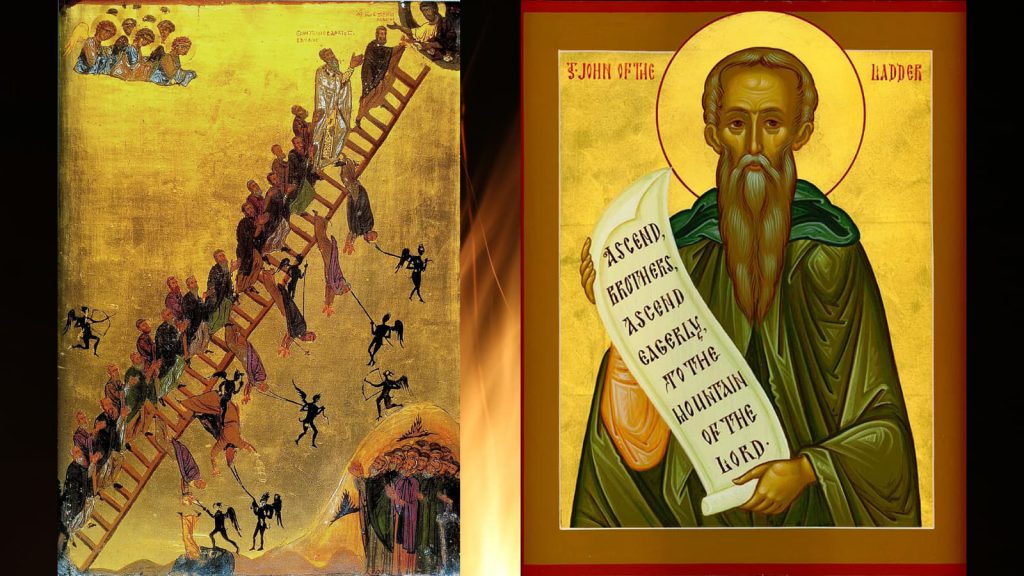 On the Fourth Sunday of Great Lent (and on March 30), the Orthodox Church commemorates our Righteous Father John Climacus, or Saint John of the Ladder. His life and writings affirm him as a supreme bearer and advocate of Christian asceticism. The Church celebrates him during the Great Fast to inspire us through his ascetic example, and to illustrate through his great spiritual work, The Ladder of Divine Ascent, how we can avoid vice and practice virtue, and thus obtain salvation.

The Life of Saint John Climacus

Saint John Climacus was born sometime in the second half of the sixth century. We do not know much of his early life, except that he forsook the vanity of the world for love of God and went into exile on Mount Sinai when he was sixteen. “Exile,” he wrote, “is a separation from everything, in order that one may hold on totally to God.”

The future Abbot of Sinai

St. John dwelt under the guidance of Abba Martyrios, who tonsured him after four years of humble, obedient discipleship. One of the other monks present at his tonsuring predicted that St. John would one day become one of the great lights of the world.

When Martyrios and John paid a visit to John the Sabbaite, one of the most famous ascetics of that time, the elder monk arose and poured water into a basin. He then used that water to wash Saint John Climacus’ feet, and he kissed St. John’s hand; but he did neither of these things for Martyrios. After St. John and Martyrios departed, John the Sabbaite’s disciple expressed his distress at his master not washing Martyrios’ feet, despite him being St. John’s superior. And the man replied, “Why are you so troubled? Believe me, I do not know who the boy is, but today I received the abbot of Sinai and washed his feet.”

After forty years, Saint John of the Ladder did indeed become the abbot according to the prophecy of the elder. This same prophecy was confirmed by the great Anastasios the Sinaite (April 21), whom they also went to visit.

40 years in solitude and stillness

After the passing of his spiritual father, St. John continued alone in the wilderness in a cave in the Wadi Thola. He traveled from time to time, going at least once as far as Alexandria. He records in The Ladder his visit to a large monastic community there and marvels of repentance, obedience, and humility which he observed. In his humility, he counted the venerable George the Wonderworker of Arselaou as his master.

In all, Saint John Climacus spent some forty years in solitude and stillness, consumed by an ever-increasing love for God. He guided the monks who dwelt in that desert since he was a most excellent and nurturing spiritual father – for in those days there were innumerable ascetics living in cells all through the mountains and valleys of Sinai. From time to time, he received visitors from farther away. At one point, some other monks, prompted to jealously by the adversary who hates all good, complained of St. John’s fame and teaching. In response, he humbly kept strict silence for over a year, until the same fathers who had complained came, asking him to speak again for the benefit of all.

Visit from Moses the Prophet

After his time in the wilderness, Saint John Climacus became the abbot of the great monastery built by the emperor Justinian beside the Burning Bush of Moses, the Holy Monastery of St. Catherine. It is recounted that, on the day of his enthronement, six hundred pilgrims came to sit for a meal, and that the great prophet Moses himself, dressed in a white tunic, could be seen coming and going, giving orders with authority to the cooks, the cellarers, the stewards and the other helpers.

The Ladder of Divine Ascent

At the request of the Abbot of Raitho (near the shore of the Red Sea), who was also named John, our venerable father wrote his wonderful book, The Ladder of Divine Ascent, in which he sets out the whole of Christian life as a divine ascent of thirty steps to Christ. Within the text, Saint John of the Ladder does not necessarily institute rules; instead he sets forth practical recommendations and short, pithy maxims designed to engage the soul. As such, it is useful not only to monastics, but to all devout Christians, and has been considered a pearl beyond price in the Orthodox world since its writing.

Copies of St. John’s book are available through many Orthodox publishers, like SVS Press and Ancient Faith. You can also purchase a copy on Amazon.

At the end of his life, Saint John Climacus designated his brother, George, as his successor at the head of the monastery. When John was about to die, George said to him: “So, you are abandoning me and leaving! I prayed, however, that you would send me to the Lord first, for without you I cannot shepherd this brotherhood.” But John reassured him, and said: “Do not grieve and do not be afraid. If I find grace before God, I shall not let you complete even a year after me.” And it was so: ten months after John’s falling asleep, George departed in his turn to the Lord.

The monastic community St. John shepherded continues to this day beside the Burning Bush on Mount Sinai. And his teachings guide and direct monastics throughout the world. During Great Lent, The Ladder is read aloud in monasteries during meals, so the monastics may receive spiritual sustenance for their souls at the same time as physical nourishment for their bodies. Today, you can still see the cave in which he dwelt in the wilderness of Sinai, but to this day, no one has found his resting place.

Saint John Climacus was a true physician of souls and had great spiritual insight into men’s behavior. He made detailed observations of the symptoms of men’s sin-sick souls, diagnosed their spiritual diseases, and prescribed the appropriate medicine for their recovery and salvation. He showed how one can ascend the “ladder of the virtues” step by step and reach the Promised Land, fleeing the Egypt of the passions. Yet, his success was due only to his own life in Christ of constant watchfulness, fasting, vigil, and prayers.

Through the intercessions of our venerable Father Saint John of the Ladder, Lord Jesus Christ, have mercy upon us and save us. Amen!