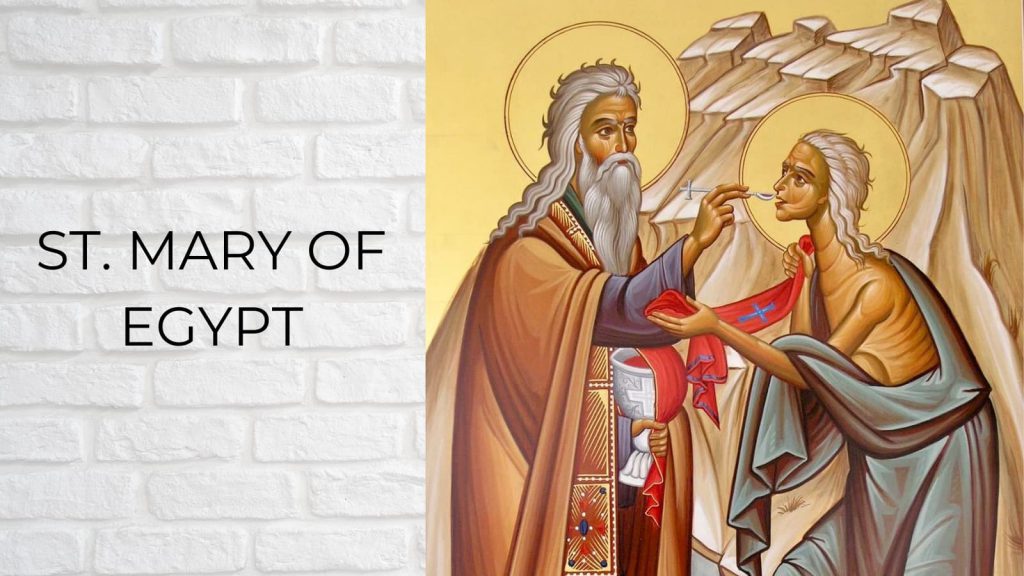 On the Fifth Sunday of Great Lent, the Orthodox Church commemorates our Righteous Mother Saint Mary of Egypt. The Church celebrates her feast day on April 1st, the day of her repose; however, due to her recognition by the Church as a model of repentance, we also celebrate her during the Great Fast. During the Canon of St. Andrew during the fifth week of great Lent, the Church reads the story of St. Mary’s life, as recorded by St. Sophronius, the Patriarch of Jerusalem (634-638 A.D.).

The life of Saint Mary of Egypt

Born in Egypt in the sixth century, St. Mary left home at the age of twelve and went to Alexandria. There, she spent the next 17 years of her life in debauchery. Living on charity and linen-weaving, she offered her body to any man. But unlike most women, she was not forced into this out of necessity. In fact, she often refused payment whenever the men tried to compensate her. Instead, she engaged in these acts to try to satisfy the desires that consumed her.

One day, seeing a crowd moving toward the port, she followed them and set sail with them for Jerusalem, the Holy City, offering her body to pay her fare. When they arrived, Saint Mary followed the crowd to the Church of the Resurrection, as it was the Feast of the Exaltation of the Cross. But, when she reached the threshold of the church, an invisible force prevented her entering, while the other pilgrims could go in without any problem.

Left alone in the narthex, Mary realized it was the impurity of her life that prevented her from approaching. She burst into tears and smote her breast and, seeing an icon of the Theotokos (Mother of God), said: “O Sovereign Lady, who didst bear God in the flesh, I know that I should not dare to look upon thine icon, thou who art pure in soul and body, because, debauched as I am, I must fill thee with disgust. But, as the God born of thee became man in order to call sinners to repentance, come to my aid! Allow me to go into the church and prostrate before His Cross. And, as soon as I have seen the Cross, I promise I will renounce the world and all pleasures, and follow the path of salvation that thou willest to show me.”

She felt herself suddenly freed from the power that had held her and was able to enter the church. There she venerated the Holy Cross. Then, returning to the icon of the Theotokos, she declared herself ready to follow the path shown to her. A voice replied to her from on high: “If you cross the Jordan, you will find rest.”

Leaving the church, Saint Mary of Egypt bought three loaves with the alms a pilgrim had given her. Once she found which road led to the Jordan, she set out on her journey. Arriving one evening at the Church of Saint John the Baptist, she washed in the Jordan River, received Holy Communion, ate half of one of the loaves, and went to sleep on the riverbank. The next morning, she crossed the river and lived from that time on in the desert. She remained there for 47 years without ever encountering another human being or animal, living off only the bread she had left and the herbs and plants of the desert.

During the first seventeen years, St. Mary endured physical hardship. Her clothes faded away to nothing more than rags, and she battled against unyielding heat and bitter cold. Perhaps more than this, she also faced violent assaults from the passions and the memory of her sins. Throwing herself on the ground, she implored the Theotokos to come to her aid. Protected by God, who desires nothing but that the sinner should turn to Him and live, she uprooted all the passions from her heart by means of extraordinary ascesis, and was able to turn the fire of carnal desire into a flame of divine love that made it possible for her to endure the implacable desert with joy.

Following 47 years in solitude, Mary met the priest Saint Zosimas (April 4) in the desert, who had journeyed to the desert for the Great Fast. When he first saw her, he thought her an apparition, and begged her to give him a blessing and speak to him. St. Mary called to him by name, and asked that he give her his cloak to hide her nakedness. They conversed for a time, and Saint Mary told Zosimas the story of her life in Egypt and her conversion to the Christian Faith. Then Mary asked him to meet her again the following year by the banks of the Jordan on Holy Thursday, and to bring Holy Communion with him.

When the day arrived, Zosimas saw Mary appearing on the further bank of the river. She made the sign of the Cross and walked on the water toward Zosimas, who attempted to bow to her. St. Mary rebuked him, saying he was far superior to her, and that he held the Eucharist in his hands. Having received Holy Communion, St. Mary wept and said: “Lord, now lettest Thou Thy servant depart in peace according to Thy word; for mine eyes have seen Thy salvation” (Luke 2:29). She then crossed back to the other side of the Jordan, asking Zosimas to meet her again the following year in the place where they had first met.

When the year was past, Zosimas went to the place and found St. Mary’s body on the ground, her arms crossed and her face turned towards the East. Beside her, she had written a message in the sand, telling Zosimas that she had died on the first of April after having received the Eucharist from him. She also instructed him to pray for her and to bury her body in that place, which was at least a 20 days’ journey from the Jordan river. Simply put, she had been miraculously transported to that place through the power of God.

After having vainly tried to dig up the earth with a stick, he saw a lion approaching Mary’s body and licking her feet. On the orders of the Elder, the beast dug a hole with its claws. Father Zosimas then placed St. Mary’s body into the grave. After the burial, Father Zosimas returned to his monastery and told of the marvels God had wrought through this pious, repentant woman, who turned away from sin and moved toward God with all her heart.

The Church remembers Saint Mary of Egypt today, as we approach the end of the Great Fast, to arouse the energy of the slothful and to urge sinners to repentance, imitating her example. From the hardened sinner that she had been, Mary has, for a great many souls crushed under the burden of sin, become a source of hope and a model of conversion. Repentance can bring us all back to God at any time, even at the eleventh hour.

O Christ our God, through the intercessions of our venerable Mother Mary of Egypt, have mercy on us and save us. Amen.

Keep Reading: Why Do The Orthodox Pray To Saints?