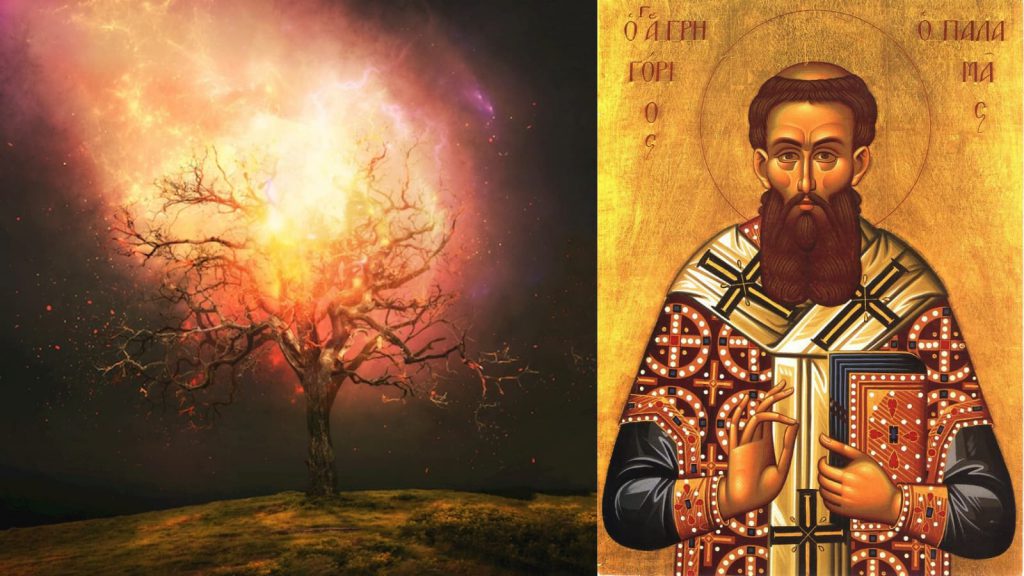 On the second Sunday of Great Lent, the Orthodox Church commemorates our holy Father St. Gregory Palamas (1296-1359), archbishop of Thessalonica, the Wonderworker. His feast day is actually November 14, but we remember him on this day also, because his teachings led to a second “triumph of Orthodoxy” in the 14th century. On this Sunday, we also learn the importance of earnest effort as we continue through the Great Fast.

The life of St. Gregory Palamas

In Constantinople in 1296 A.D., St. Gregory was born. His parents, aristocrats in the court of the pious Emperor Andronicus II Palaeologus (1282-1328), led fervent lives of prayer. While Gregory was still young, his father died, and Andronicus himself helped St. Gregory’s mother to care for her seven children. Gregory, the eldest, received an exemplary education in philosophy. He was so proficient that, on listening to him, his master could believe he was hearing Aristotle himself. Despite his success in secular learning, St. Gregory’s real interest lay with the things of God.

Barely twenty years old, St. Gregory decided to abandon the vanities of the world. His mother, two sisters, two brothers and many of his servants entered the monastic life with him. He and his two brothers settled near the Monastery of Vatopedi on Mount Athos, under the direction of the Elder Nicodemus (July 11). St. Gregory made rapid progress in prayer, putting on the virtues of obedience, humility, meekness, fasting, vigil and the different kinds of renunciation that make the body subject to the spirit. A year or so after he was tonsured, the holy Evangelist John the Theologian appeared to him in a vision and promised him his spiritual protection.

After the early deaths of his brother, Theodosius, and Elder Nicodemus, St. Gregory spent eight years of spiritual struggle under the guidance of the Elder Nicephorus. After Elder Nicephorus’ death, St. Gregory then transferred to the Monastery of the Great Lavra of St. Athanasius (July 5). There he lived with such abstinence that he could go three months without sleep and remain unburdened. After another three years, he resettled in the small skete of Glossia in the wilderness. The abbot of the monastery soon taught him how to pray without ceasing and cultivate the practice of the prayer of the heart, referred to as hesychasm (Gr. hesychia; calm, silence). During his stay at Glossia, St. Gregory adopted hesychasm as an essential part of his life.

Ordination to the priesthood

In the year 1326 A.D., the threat of raids by Turkish pirates forced St. Gregory and his brethren to retreat to Thessalonica, where he was ordained to the priesthood. Saint Gregory combined his priestly duties with the life of a hermit. Five days of the week he spent in silence and prayer, and only on Saturday and Sunday did he come out to his people. He celebrated divine services, preached, and shared a paternal meal with the people. Sometimes he also visited theological gatherings of the city’s educated youth, headed by the future patriarch, Isidore.

When his mother died, he visited Constantinople to fetch his sisters, whom he settled in a hermitage near him. But as Serbian raids in the region became more and more frequent, he went back to Mount Athos, settling just above the Lavra in the hermitage of Saint Savas. Here he lived in even greater seclusion, only receiving visitors on Sundays and feast days.

One day in a dream, he saw that he was full of a milk from heaven which, as it overflowed, changed into wine and filled the air with a wonderful scent. This sign from God told him it was time to teach his brethren the mysteries that God revealed to him. He wrote several ascetic treatises at this time, and, in 1335, was appointed Abbot of the Monastery of Esphigmenou. But the two hundred monks who lived there did not understand his zeal or spiritual expectations, so he returned to his hermitage in Glossia after one year.

In the 1330’s, Barlaam, a monk from Calabria, Italy, won a great name for himself in Constantinople. He wrote multiple treatises on logic and astronomy, was a skilled and sharp-witted orator, and received a university chair in the capital. Barlaam was particularly fond of the mystical writings of Saint Dionysius the Areopagite, which he interpreted in an entirely philosophical way, making knowledge of God the object of logic and reason rather than authentic experience.

Barlaam traveled to Mount Athos, where he learned of the spiritual life of the hesychasts, who were said to have experienced the uncreated light of God through prayer. He was scandalized, asserting that mental prayer was heresy and that we could never know the essence of God. Barlaam then traveled about, entering into disputes with Eastern monks practicing hesychasm to demonstrate that the uncreated light they thought they were seeing was, in fact, created and material. The hesychast monks appealed to St. Gregory, who then wrote several treatises in which he answered Barlaam’s accusations, including the “Triads in Defense of the Holy Hesychasts” (1338) and the “Hagiorite Tome” (1340).

At the Constantinople Council in 1341, St. Gregory Palamas debated Barlaam, focusing on the nature of the light of Mount Tabor. The Council accepted St. Gregory’s teaching: that God, unapproachable in His Essence, reveals Himself through His energies, which are directed towards the world and are able to be perceived, like the light of Tabor, while at the same time remaining immaterial and uncreated. The Church then condemned Barlaam’s philosophical humanistic teachings (which would later inspire the European Renaissance), and anathematized him. He then fled back to Calabria, Italy.

But the dispute was far from over. No sooner had St. Gregory Palamas returned to Thessalonica that an old friend, Akindynos, wrote a series of tracts declaring St. Gregory a heretic, guilty of causing disorder in the Church. St. Gregory wrote a detailed refutation of the charges Akindynos ascribed to him; however, Patriarch John XIV Kalekos and emperor Andronicus III Palaeologus supported Akindynos. They had St. Gregory imprisoned for four years. During this time, he continued working on his refutation of Akindynos. Meanwhile, Patriarch John was deposed, and Isidore (we mentioned him earlier) became Patriarch in his place. Soon after, St. Gregory was set free and named Archbishop of Thessalonica in 1347 A.D.

The Council of Blachernae in 1351 finally ended the hesychast controversy by once again affirming the teachings of St. Gregory Palamas. In the Synodal Tome, the doctrine of Saint Gregory on the uncreated energies and on the nature of grace was recognized as the rule of faith of the Orthodox Church. And it remains so to this day. Praise be to God!

But despite this, the people of Thessalonica did not immediately accept St. Gregory, so he felt compelled to travel and live in various places. On one of his trips to Constantinople, their Byzantine ship fell into the hands of the Turks, and St. Gregory was taken captive for one year. While in captivity, Saint Gregory preached to the other prisoners and even to his Muslim captors. They were astonished by his wisdom, yet some of the Muslims would still not accept what he preached. Instead, they beat and tortured him; had they not expected a large ransom for him from Serbia, they probably would have killed him. After the ransom had been paid, St. Gregory was released and returned to Thessalonica, where he resumed his duties as a pastor and wonderworker.

Saint Gregory performed many miracles in the three years before his death, healing those afflicted with illness. On the eve of his repose, Saint John Chrysostom appeared to him in a vision. With the words “To the heights! To the heights!” Saint Gregory Palamas fell asleep in the Lord on November 14, 1359. Only 9 years later, the Church officially canonized him. To this day, this awesome Saint continues to work miracles to the glory of God.

The importance of effort during the Great Fast

In addition to celebrating St. Gregory Palamas on this Sunday, we also receive an edifying reminder of the importance of earnest effort as we continue through Great Lent. This theme builds off the theme of Faith that we see during the First Sunday of Great Lent, the Sunday of Orthodoxy. In the Epistle reading (Hebrews 1:10-2:3), the author tells us to “give the more earnest heed to the things we have heard, lest we drift away […] how shall we escape if we neglect so great a salvation?” This message then becomes amplified through the Gospel lesson (Mark 2:1-12), in which we hear of the healing of the paralytic in Capernaum.

The story of the paralytic reminds us once again how man’s sinful nature has brought pain and suffering into the world. Moreover, it reminds us that Jesus Christ is the healer of both the spiritual (invisible) and the physical (visible) ailments of mankind. So many people gathered outside the house where Jesus was, so thirsty to hear His teachings, that there was no room to receive anyone at the door. The Lord’s teachings were altogether different from those of the Pharisees and scribes; they were pure and meaningful and reflected in the way Christ lived His life. This is an important lesson for us. Jesus lived the Truth as He preached it, as should we.

As this passage continues, we see four men trying to get to Jesus. With no luck getting to Him through the door, they go to the roof of the house and uncover it, letting down their friend in need of healing. Motivated by great love toward God and their fellow man, they did not abandon a friend in need at the first sign of difficulty, but instead they persisted. Much like these men, we too should take the time and make the earnest effort to help those in need (as well as ourselves). While this certainly means giving our time and our money, it also means fasting and offering up prayers for them and for ourselves, which we know has great power before God (James 5:16).

On this day, let us reflect on the life of St. Gregory Palamas and the teachings of the Church he helped protect. Let us also meditate on the lesson from the Gospel of Mark and see how we are so similar to the paralytic – in need of spiritual and physical healing – and at the same time also like his friends – helping others in need. Let us ask the Lord to reach into our hearts, forgive our sins and heal us, so that He can send us into the world to fulfill His will as His sons and daughters. Peace be with you all. Amen!