John the Baptist, Forerunner of Christ 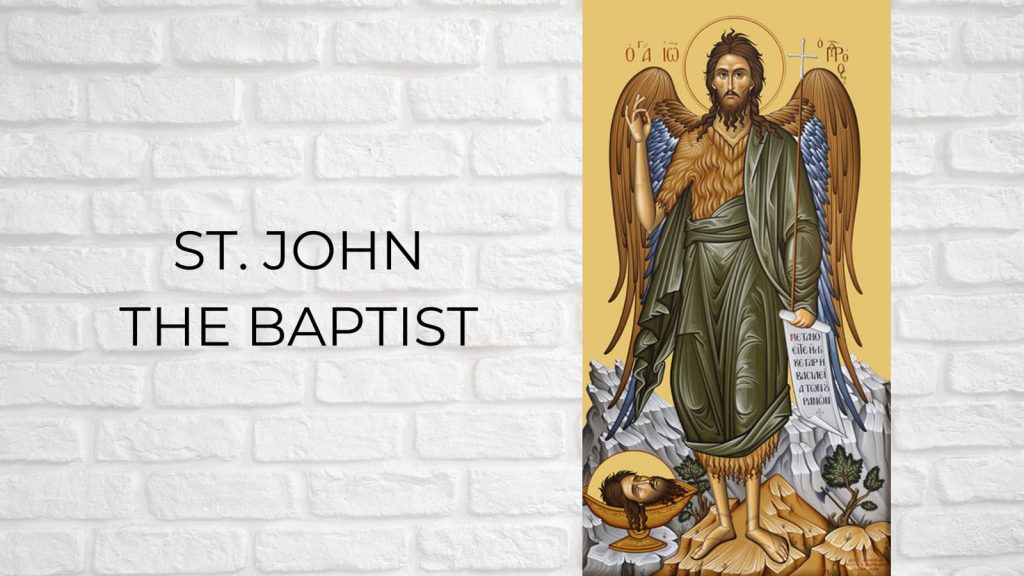 On January 7th in the Orthodox Church, we commemorate the glorious Prophet and Forerunner Saint John the Baptist. Chosen before his birth as the herald and forerunner of the Messiah (Luke 1:13-17), John the Baptist plays a crucial role in the history of salvation. In this post, we explore the role he played, and honor this wondrous Saint who died a Martyr for Christ, his cousin and Lord.

The Prophecy of Isaiah

According to the Gospel account, the birth of Saint John the Baptist fulfilled the prophecy of the return of Elijah (Isaiah 40:3-5; Matthew 11:14), who was to precede the Messiah as “the voice of one crying in the wilderness: ‘Prepare the way of the Lord’”. This is why we refer to Saint John as the Forerunner, because he came before Christ, preparing men for His teaching and His ministry.

The Life of St. John the Baptist

John the Baptist was the son of the prophet and priest Zacharias and Elizabeth, descendant of the daughters of Aaron and daughter of Saint Anna’s (Christ’s grandmother) sister, Zoia. He is, therefore, a cousin of the Lord through his mother. Moreover, as a descendant of Aaron, John held the Aaronic priesthood, and thus was able to perform baptisms.

The holy Apostle and Evangelist Luke writes of John’s miraculous conception (Luke 1:5-25). He then records the Virgin Mary’s visit to her cousin, Elizabeth, who was then six months pregnant with John the Baptist. The two women embraced, and at recognizing the unborn Christ as the Promised Messiah, the unborn John leapt in his mother’s womb (Luke 1:39-45).

King Herod, intent on killing the Messiah he feared would replace him as King of the Jews, targeted the infant John and his family. After John’s birth, Zacharias was murdered in the temple for refusing to divulge the location of his wife and son. Elizabeth fled with her son to the mountainous tract of Judea between Jerusalem and the Dead Sea, where he lived as a Nazirite, or ascetic, until the time came to baptize the people with water and preach repentance (Mark 1:4), preparing the way of the Lord.

Ministry as an adult

As an adult John the Baptist started to preach in public, and people from “every quarter” were attracted to his message (see Mk 11:32; Lk 7:29; Acts 18:25; Acts 19:1–7). He prophesied the coming of the Messiah, One “whose sandal strap [he was not] worthy to stoop down and loose” (Mk 1:7). One who would baptize not only with water but also with the Holy Spirit (Mk 1:8). The essence of his preaching was the necessity of repentance and turning away from selfish pursuits. He denounced the Sadducees and Pharisees as a “generation of vipers,” and warned them not to assume their heritage gave them special privilege (Luke 3:8). He warned tax collectors and soldiers against extortion and plunder. His doctrine and manner of life stirred interest, bringing people from all over to see him on the banks of the Jordan River. There he baptized thousands unto repentance.

The fame of John the Baptist reached the ears of Jesus in Nazareth (Matt. 3:5), who came to the Jordan and requested that John baptize Him, knowing what was fitting “to fulfill all righteousness” (Mt 3:15). John’s special office ceased with the baptism of Jesus, who must now “increase” as the King come to his kingdom. He continued, however, for a while to bear testimony to the Messiahship of Jesus. He pointed him out to his disciples, saying, “Behold the Lamb of God.”

John’s work was crucial to Jesus’ ministry, because the people’s acceptance of him as a godly man prepared them to accept Jesus Christ as well (Jn 5:33–35). In fact, Jesus’ first disciples came from John’s brotherhood (Jn 1:35–39). Additionally, it was one of John the Baptist’s followers who filled the vacancy in the apostolic college left by Judas’ betrayal (Acts 1:22).

After about six months, the public ministry of John the Baptist ended suddenly, due to his imprisonment by King Herod. He had earned the ire of the King for criticizing Herod’s decision to take to himself the wife of his brother Phillip (Lk 3:19). Imprisoned in the fortress of Machaerus, about 9 miles east of the Dead Sea, John the Baptist was then beheaded at the instigation of Herodias, Herod’s wife. Herod had promised to give his step-daughter anything she asked. After seeking her mother’s counsel, the girl (Salomé), asked for John’s head on a platter (Mk 6:24-29).

His disciples, having consigned the headless body to the grave, went and told Jesus all that had occurred (Mt 14:3-12). John’s death occurred just before the third Passover of Jesus’ ministry.

The Orthodox Church commemorates Saint John the Baptist in special hymns every Tuesday, as well as on designated feast days throughout the year.

The Orthodox Church remembers Saint John the Forerunner on six separate feast days, listed here in order of the ecclesiastical year, which begins on September 1:

After the Seventh Ecumenical Council (787), which reestablished the veneration of icons, his Precious Head was returned to the Byzantine capital around the year AD 850.

Today, his relics rest in several places including:

John the Baptist was the last of the Old Testament prophets, thus serving as a bridge figure between that period of revelation and Jesus. They also embrace a tradition that, following his death, John descended into Hell and there once more preached that Jesus the Messiah was coming.

He was an ascetic and great prophet, who baptized Christ and became one of the most revered saints in the Orthodox Church. Because he baptized Christ, he is the patron saint of godparents. He is sometimes called the Angel of the Desert; because of this title, he is sometimes depicted with wings.