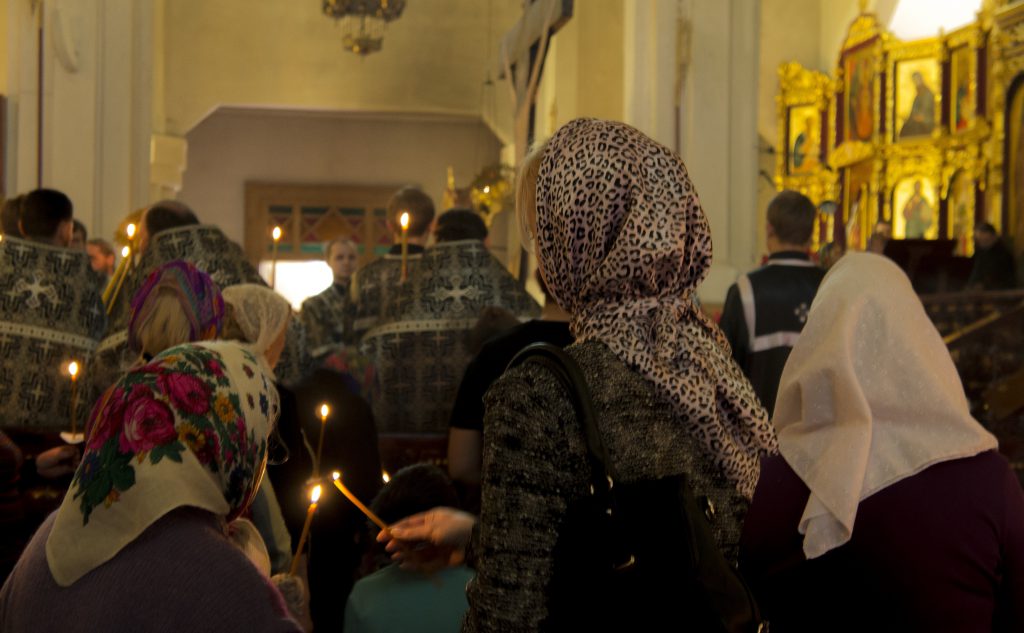 For centuries, Christian women have worn head coverings during worship. Only recently has this ancient, pious practice fallen by the wayside in many Christian communities, including Orthodox ones. Feminism considers head coverings oppressive and sexist, insisting that women must look and act exactly like men. However, covering the head during prayer helps women nurture their God-given feminine nature by cultivating humility, chastity, and obedience. In this post, we tell you everything you need to know about the practice of head covering (or veiling) for Christian women.

The main passage involving women’s head coverings in Scripture is 1 Corinthians 11:2-16. In this letter to Corinth, St. Paul speaks to a number of problems occurring in their church community. The letter contains several sections, which he uses to discuss seven major issues with his spiritual children:

The passage in question falls under the third to last category: Eucharistic theology and practice. This tells us we are dealing with worship specifically, rather than other aspects of everyday life. This is a key distinction, as it differentiates Orthodoxy from Islam, which requires women cover their heads (and in some cases, everything but their eyes) at all times when in public.

Naturally, an Orthodox woman can choose to wear a veil in public if that is her desire; however, the Faith does not require this, nor is it enforced in the way we see in Islam.

Now let’s take a look at the passage itself and examine it more closely.

What does St. Paul mean?

In 1 Corinthians 11:2, St. Paul clearly exhorts the people to follow the traditions (oral and written) he passed down to them. A woman covering her head is one of these traditions, which was also an accepted Jewish practice throughout the Old Testament (Numbers 5:18; Genesis 24:64-65). It carried over into Christian tradition, as we can see in St. Paul’s letter, the writings of the Church Fathers, and in our iconography (more on these last two in a bit).

Requesting this of a woman is not oppression or sexism, but rather, an incredible compliment. Early Christian women chose to submit themselves to the Church and not allow their beauty to distract others during worship. St. Paul writes that this form of piety brings honor upon a woman, as her hair is “a glory to her.” Covering the thing that brings her glory in the presence of God is an act of submission and humility before Him. Any woman who submits to God in this way truly is a shining example to those around her.

Evidence for Christian head coverings in the early Church

During the days of the ancient Church, wearing head coverings was a unanimous practice among Christian women. Multiple Fathers of the Church mention this in their writings, including Tertullian of Carthage, Clement of Alexandria, Hippolytus of Rome, John Chrysostom, and Augustine of Hippo, among others.

“Woman and man are to go to church decently attired…for this is the wish of the Word, since it is becoming for her to pray veiled.“[2]

In The Apostolic Tradition, a work ascribed to Hippolytus, he says: “And let all women have their heads covered with an opaque cloth…“[3]

“…the business of whether to cover one’s head was legislated by nature. When I say “nature,” I mean “God.” For he is the one who created nature. Take note, therefore, what great harm comes from overturning these boundaries! And don’t tell me that this is a small sin.”[4]

In a sermon during the Feast of the Ascension, he further asserts, “The angels are present here . . . Open the eyes of faith and look upon this sight. For if the very air is filled with angels, how much more so the Church! . . . Hear the Apostle teaching this, when he bids the women to cover their heads with a veil because of the presence of the angels.“

“It is not becoming, even in married women, to uncover their hair, since the apostle commands women to keep their heads covered.”[5]

We could spend hours pouring over quotes from the Church Fathers, but for the sake of brevity, we will stop there, and look now toward the head covering and its prominence in Orthodox iconography.

Head coverings on women in iconography

The only two Christian women without head coverings in their icons are St. Mary of Egypt and Eve, the first mother. The former did not wear one in her icon because the clothes she took with her to the desert disintegrated into rags. She had only the cloak St. Zosimas brought to her. And the latter, Eve, is depicted either with fig leaves or garments of skin, because it was until she ate of the fruit that she remained “naked and unashamed” with Adam in Paradise. Aside from these two women, if there are any other examples, they are extremely rare. And they are most likely aberrations from iconographic tradition.

Why do Christian women cover their heads during worship?

The primary reason Christian women choose to wear head coverings during worship is to adhere to the Holy Tradition of the Church. After all, women covering their heads during worship is an ancient practice in the Christian Church, one that has fallen into disuse, especially in the West. Note that there may be other secondary reasons why women choose to wear head coverings and that these differ from person to person.

For example, some women wear them to help themselves or others focus more on prayer – in other words, they dress a certain way out of modesty. Others may decide to wear them to express their respect for a sacred space and their desire to be different from the secular world around them. Naturally, women can express all of these things without wearing a head covering or veil. But many Christian women choose to express these things through the very wearing of a head covering.

Some Eastern Catholic, Eastern Orthodox and Oriental Orthodox Churches require women to cover their heads in church. However this is not universally enforced. Here in the United States, the custom varies depending on the congregation and its origins. In most parishes, should women wish to cover their heads, they are encouraged to do so.

Where can I buy a head covering?

You can usually find scarves and headbands to use for coverings at your local thrift stores and clothing outlets. Target and Walmart also have nice products for a modest price. Alternatively, if you prefer to purchase online, here are a couple great companies we have found that specialize in head coverings:

How do I wear a head covering?

There are endless ways you can wear your head coverings! A simple Google image search will show you just how many options there are. At first it can be a bit overwhelming, when you see all the styles out there. Start with a style that appeals to you, and change it every couple weeks or so until you find one you like most.

Depending on what you use for your covering, the way you wear it differs. In this video tutorial, Christy Overlin shares a few easy styles for beginners using handkerchiefs, scarves, and headbands. The best part? All of these styles are appropriate for attending Orthodox church services!

Ultimately, in America, most jurisdictions in the Orthodox Church leave the woman to decide whether to cover her head. Over the last several years, many more women in Orthodox (and even Catholic and Protestant) churches have started covering their heads during worship. In a world that insists on tossing Christianity and its treasured values by the wayside, we are eager to connect with the ancient roots of the Church in every way possible!